Thieves dismantled and stole steering wheel, navigation device, and all key fittings from the inside of BMW 3 Series.
By : HT Auto Desk
| Updated on: 14 Jun 2022, 08:48 AM 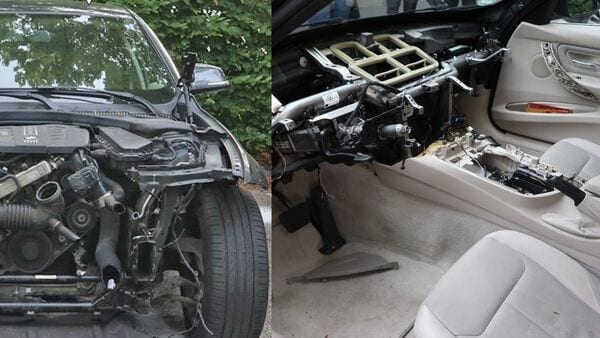 Images of the BMW 3 Series sedan that has been nearly ripped off all its essential components.

We often park our vehicles in public spaces but mostly refrain from leaving them unguarded overnight for reasons such as avoiding any theft or accident damages. However, a BMW driver trusted his stars way too much and left the vehicle overnight at a public space in Germany. Unfortunately, his stars were cross with him and his 3 Series was stripped off its essential components by thieves overnight.

Key components including the entire front end and the dashboard of the vehicle, with damages totalling nearly $22,000 (approx ₹17 lakh). The local police has already started an investigation into the matter and are looking for the perpetrators. The incident came to the notice of the officials when two passers-by noticed missing hood, front apron and several parts from the engine compartment. They then alerted the authorities.

When local police reached at the site of the incident, they noticed that the interior of the 3-Series had also been "cannibalized". Thieves had dismantled and stolen the steering wheel, navigation device, all fittings and even the gear lever. The police has discovered that the thieves cut off the vehicle parts from the engine compartment with a flex.

The vehicle has been rendered almost unidentifiable as most of its parts are stolen including the bumper, hood, and headlights. Though commonly thieves target wheels and catalytic converters of parked vehicles but in this case, they had bigger plans in mind.

The local police has asked witnesses to help with the investigation and has deciphered that the perpetrators must have been traveling with a larger vehicle or van so as to store and transport the dismantled parts. As yet, the investigation hasn’t yielded any results but is making progress gradually.