Panasonic's decision to work on the new cell for Tesla comes as brisk sales of Tesla EVs have stabilized profits at their joint battery venture in Nevada.
By : Reuters
| Updated on: 29 Oct 2020, 16:42 PM 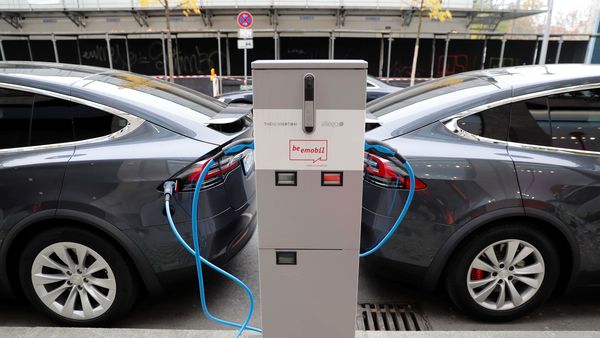 Panasonic Corp said on Thursday it is working to develop a new battery cell for Tesla Inc based on the US electric vehicle maker's new cell format, as the Japanese company moves forward its decade-old partnership with Tesla.

Tesla's new battery cell — a larger cylindrical format called 4680 that can store more energy and is easier to make — is key to achieving the goal of cutting battery costs in half and ramping up battery production nearly 100-fold by 2030.

"We have considerable know-how for that battery," Panasonic's Chief Financial Officer Hirokazu Umeda said at a briefing as the company reported an 11% increase in second-quarter operating profit, beating analyst estimates.

"We started working on it immediately after Tesla's Battery Day (in September) and are also preparing to set up a prototype production line in parallel," he added.

Panasonic's decision to work on the new cell for Tesla comes as brisk sales of Tesla EVs have stabilized profits at their joint battery venture in Nevada following several years of production troubles and delays at the US partner.

Umeda also said the company has decided to launch an additional production line at the Nevada factory next year, increasing the plant's total capacity by some 10% to 38-39 gigawatt hours (GWh) a year by around 2022.

"We are targeting a profit margin of around 5% at our Tesla battery business within two to three years," he added.

Tesla has said it plans to manufacture its own battery cells at several highly automated factories around the world, but will also continue to use its existing cell suppliers - Panasonic, South Korea's LG Chem and China's Contemporary Amperex Technology Co.

With the advanced battery cell design and new manufacturing processes, Tesla CEO Elon Musk promised to cut battery costs in half and deliver an "affordable" electric car in several years, though experts have questioned how quickly they can be implemented.