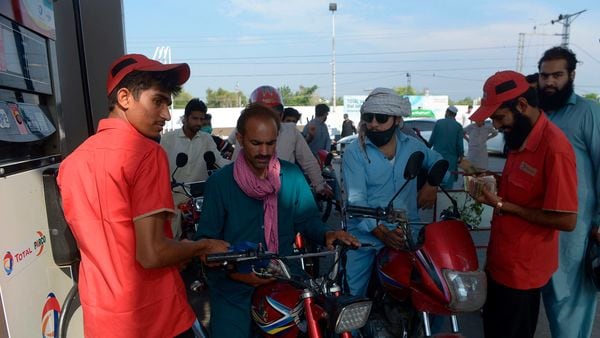 Commuters at a fuel station in Peshawar.

Pakistan may soon deregulate petrol pricing and marketing in the country in the midst of a fuel crisis that has seen several cities here woefully short of fuel stockpiles. While oil marketing companies have faced enormous flak and have been accused of creating an artificial shortage, these companies have hit back saying imports have come down.

Serpentine queues of vehicles at fuel stations in many cities in Pakistan were witnessed through the entire weekend. Many accused pump stations of charging four times the prescribed price. Pump owners defended themselves saying that supplies are low and that they may have to shut operations if the situation prevails. While the Pakistani government assured that there are enough reserves, the country's Oil and Gas Regulatory Authority (Ogra) warned oil marketing companies to fall in line once again.

Pakistan's Dawn has now reported that the Imran Khan government is looking at the possibility of completely deregulating petrol pricing and marketing, and may remove uniform pricing mechanism.

How that would help in the prevailing situation remains to be seen because deregulating petrol prices would mean Ogra would not be able to take punitive action against oil marketing companies if it is required and can best issue warning letters, states the above mentioned report.

Local reports highlight that despite Pakistani government's assurance, oil marketing companies cannot be completely blamed because many of them actually have reserves which are near empty. This has affected supply which, in turn, has led to pump stations putting out less fuel. Vehicles are inter spaced with people on foot and bottles and tanks in hand for a refill in many cities.