Home Auto News Over 1,100 Vehicles Penalised In Noida In A Day For Violating Covid 19 Curbs

Over 1,100 vehicles penalised in Noida in a day for violating Covid-19 curbs 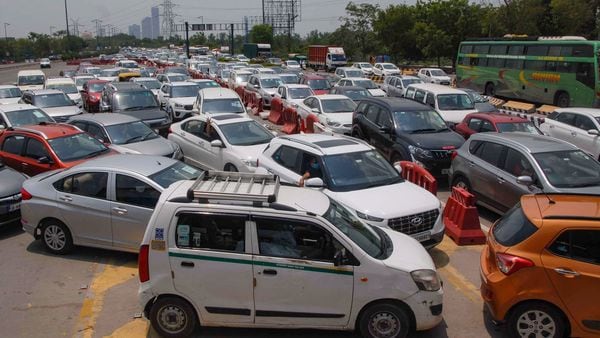 There is no ban on intrastate and interstate movement of people and goods, senior UP government officials have said. (Representational photo)

Owners of more than 1,100 vehicles were penalised across Noida and Greater Noida on Friday for allegedly violating curbs imposed due to the Covid-19 pandemic, Gautam Buddh Nagar police said.

Also, 17 vehicles were impounded for similar violation during a 24-hour period till Thursday night, the police said, even as “Unlock 2" -- the phased re-opening of activities that had been barred to contain the spread of Covid-19 -- began in the state on Wednesday.

Criminal Procedure Code (CrPC) section 144, which bars assembly of more than four people, is in force in Gautam Buddh Nagar, whose urban areas fall in the 'Red Zone' for Covid-19.

"A total of 2,497 vehicles were checked across 200 barrier points in the district and challans issued to 1,145 of them, while another 17 were impounded," the police said in a statement.

Altogether, ₹92,000 were collected in fines during the action, the police said.

The Noida-Delhi border continues to remain sealed for movement except for essential services and people having passes issued by the district administration, according to officials.

The Centre had on Monday issued guidelines for the month-long ''Unlock 2'' from Wednesday.

The ''Unlock 1'', a graded exit from the national lockdown imposed on March 25, ended on Tuesday.

The Uttar Pradesh government has decided to tow the Centre's guidelines in the state where educational institutions, Metro services, cinema halls and gyms will continue to remain shut.

There is no ban on intrastate and interstate movement of people and goods, senior UP government officials said.

However, the district administration, police and health department officials of Gautam Buddh Nagar and Ghaziabad can impose a ban at the local-level after consulting each other, they said.

Both the districts had sealed their borders with Delhi in view of the high rate of Covid-19 cases in the national capital in a bid to break the chain of transmission of coronavirus.