The Ola Electric scooter is currently available for bookings at a refundable token amount of ₹499.The e-scooter will be offered in as many as ten colour options and may follow a direct-to-home sales model.
By : HT Auto Desk
| Updated on: 07 Aug 2021, 13:12 PM 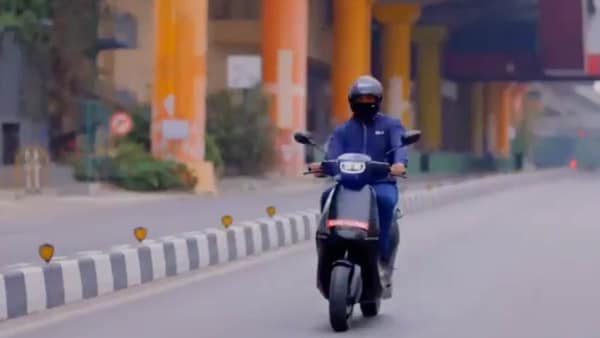 Ola Electric CEO Bhavish Aggarwal taking a ride on the upcoming electric scooter from his company.

The upcoming Ola Electric scooter will be offered with a reverse mode, the company has confirmed. CEO Bhavish Aggarwal posted a video on social media of an Ola e-scooter being driven in reverse gear, with a caption, "A revolution to Reverse climate change!" The Ola Electric scooter is scheduled to be launched in the country on August 15.

Riders will be able to operate the reverse mode on the e-scooter at a high speed as well, the company hinted. "You can reverse the Ola Scooter at an unbelievable pace," it wrote on its official Twitter handle.

The scooter is currently available for bookings at a refundable token amount of ₹499. The company has so far received bookings from over 1,000 cities across the country since opening it in late July. The scooter is expected to be priced at around ₹one lakh and this can further reduce with the state-level subsidies. The company may follow a direct-to-home sales model for the its first e-scooter.

The cab aggregator-turned EV maker has already confirmed that the Ola Electric scooter will offer several segment leading features such as the biggest-in-class boot space, app-based keyless access and a segment-leading range. It is expected to be capable of running 150 km on a single charge and have a top speed in excess of 100 kmph. The scooter will be capable of charging from 0 to 50% in just 18 minutes, delivering 75 km of half-cycle charge.

The e-scooter will be offered in as many as ten colour options including Yellow, Purple, Gray, Dark Blue, among others. It sports a quirky exterior design and simplistic styling approach as well as an LED lighting package. It will come with features such as dual projector headlamp, split-type rear grab handles, a hook for carrying luggage, single-piece seat, external charging port, a black coloured floor mat and a fully digital instrument cluster.