Home Auto News No Money To Buy Petrol, This Country Asks Citizen Not To Wait In Line At Pumps

Sri Lanka has no money left to buy even a ship of petrol as the island nation's economic crisis continues. It recently received diesel lifeline from India.
By : HT Auto Desk
| Updated on: 19 May 2022, 07:30 AM 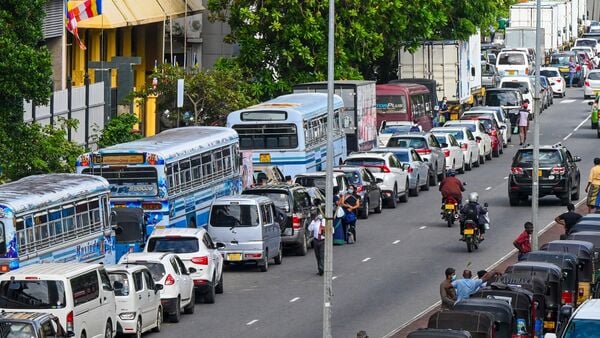 Vehicles queue along a street to buy petrol at Ceylon petroleum corporation fuel station in Colombo.

Sri Lanka is running out of petrol, and it does not have enough money to buy fresh stock. The economic crisis has reached a point where the island nation does not have enough foreign exchange to buy a ship of petrol. It is urging its people to stop queueing up outside petrol pumps to buy fuel. Long queues of vehicles, including public transport, have been seen in the capital city of Colombo as the fuel crisis in Sri Lanka has worsened.

Sri Lankan power and energy minister Kanchana Wijesekera told Parliament that the country is facing an issue of petrol availability. He admitted that the government does not have enough money to buy petrol. “We do not have US dollars to make the payment for the vessel with petrol," he said. Since March 28, a vessel with petrol has been anchored in Sri Lankan waters. Wijesekera added that another 53 million dollars is due for the same vessel for a previous shipment in January 2022.

“This is why we requested the people not to wait in line for fuel. There is no issue with diesel. But, please do not stay in line for petrol. We have limited stocks of petrol and are trying to distribute it accordingly for essential services, especially ambulances," the minister said. However, he assured that the country has received sufficient stocks of diesel. “On Tuesday, we distributed super diesel and auto diesel to all the filling stations in the country. We hope to ensure the continuous supply of diesel from today (Wednesday) to all the 1,190 active filling stations in the country, although there are 1,300 filling stations," he told the House.

“We apologise for this. We understand that three-wheelers can only operate with the daily fuel purchases. We appeal to the public not to remain in line for fuel on Wednesday and Thursday," Wijesekera said. The minister also appealed against hoarding of fuel and said the government cannot deliver petrol for the next two days. Wijesekera said it would take another three days from Friday to complete the distribution of petrol to all filling stations.

“Of the 67 proposals made to the ministry on fuel purchases, 39 were identified as practically applicable in Sri Lanka," he said, adding that no matter what proposal is made, the country cannot import petrol without opening the letter of credit.

Earlier this month, India helped Sri Lanka with its current credit line by a further 200 million dollars to refill its fuel stock. India has committed over USD 3 billion to the debt-ridden island nation in loans, credit lines and credit swaps since January this year.

Sri Lanka is going through the worst economic crisis since independence in 1948. A crippling shortage of foreign reserves has led to long queues for fuel, cooking gas and other essentials while power cuts and soaring food prices heaped misery on the people.