Nissan's increasingly dismal performance has heaped pressure on Uchida, formerly Nissan's China chief who became its third CEO since September, to come up with aggressive steps to revive the company.
By : Reuters
| Updated on: 18 Feb 2020, 09:01 AM 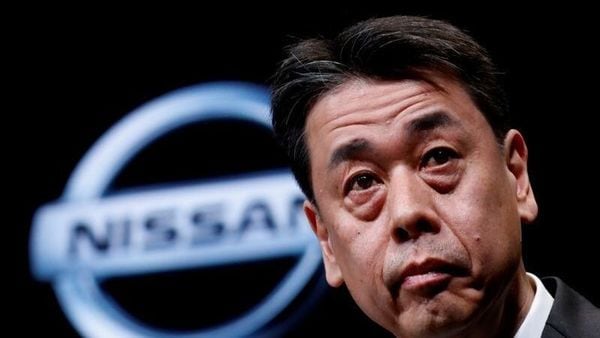 Nissan Motor Co Chief Executive Makoto Uchida on Tuesday said he expects weak global car sales to keep the Japanese automaker's earnings and cashflow under pressure through the end of the financial year in March.

Uchida was addressing shareholders for the first time since taking over the top position at Nissan in December as the automaker struggles to recover from crumbling profits and a corporate shake-up following the arrest of former chairman Carlos Ghosn in late 2018.

Last week, Nissan slashed its forecasts for full-year profit to an 11-year low and cut its dividend outlook to its lowest since the 2011 financial year, after dwindling car sales drove the company to post its first quarterly net loss in nearly a decade.

Shareholders gathered at an extraordinary meeting in Yokohama to vote in new directors including Uchida and Chief Operating Officer Ashwani Gupta.

Their appointments highlight a changing of the guard at Japan's No. 2 automaker, as shareholders were also voting on motions for former company stalwarts CEO Hiroto Saikawa and COO Yashuhiro Yamauchi to leave their board director positions.

Nissan's increasingly dismal performance has heaped pressure on Uchida, formerly Nissan's China chief who became its third CEO since September, to come up with aggressive steps to revive the company.

The new boss must prove to the board he can accelerate cost-cutting and rebuild profits at the 86-year-old Japanese giant, and that he has the right strategy to repair its partnership with France's Renault, sources have told Reuters.

Nissan's shares are trading around their lowest level in more than a decade following last week's frail results.