The all-new Aston Martin DBX SUV may beat the power outputs of Porsche Cayenne Turbo GT and Lamborghini Urus to live up to the claim of being the world's most powerful luxury SUV.
By : HT Auto Desk
| Updated on: 23 Jan 2022, 11:35 AM 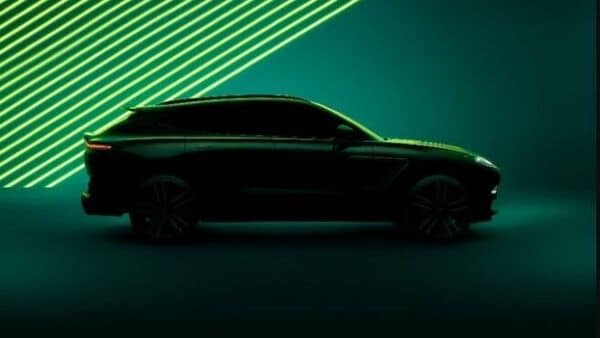 The new teaser shows that the upcoming Aston Martin DBX may have undergone some changes in terms of the design aspect.

British luxury carmaker Aston Martin has released a new teaser of the upcoming 2022 Aston Martin DBX SUV, which will come as an update form of what is dubbed as the world's most powerful luxury SUV. In the teaser, one can see the side profile of the car. The company announced the arrival of the updated luxury SUV last week and informed it is going to unveil it on February 1.

The new teaser shows that the upcoming Aston Martin DBX may have undergone some changes in terms of the design aspect. From the teaser, it seems that it will feature a huge diffuser on its rear bumper along with a big front splitter. The SUV also sports newly designed wheels, while any other details about the car has not been revealed by the Gaydon-based company.

The world’s most powerful luxury SUV.

It is being guessed that the SUV may be called the DBX S and it may sit as the new top trim in its range. Considering the automaker's claim, one can expect that the upcoming SUV will beat the 631 hp power of Porsche Cayenne Turbo GT and the 641 hp of Lamborghini Urus. However, one has to wait for the unveiling to be certain.

The current version of Aston Martin DBX, under its hood, sports a 3.0-litre M256 turbocharged I6 engine for the Chinese market while for the international market, it gets a 4.0-litre M177 twin-turbocharged V8 engine which is more powerful. The latter is capable of generating a power output of 534 hp and produces a peak torque of 700 Nm. These engines come from Mercedes-AMG.

In the interior, the present model features a 10.25-inch TFT central display, a 12.3-inch TFT driver information display, 12v charging sockets for front and rear passengers along with Apple CarPlay connectivity among many more. One can expect that the upcoming luxury SUV may come with state-of-art technical features.