Mitsubishi shared that it has designed the new Outlander PHEV SUV keeping in mind the new generations' preferences.The automaker has also changed the interior of the Outlander PHEV SUV to a great extend.
By : HT Auto Desk
| Updated on: 15 Oct 2021, 09:58 AM 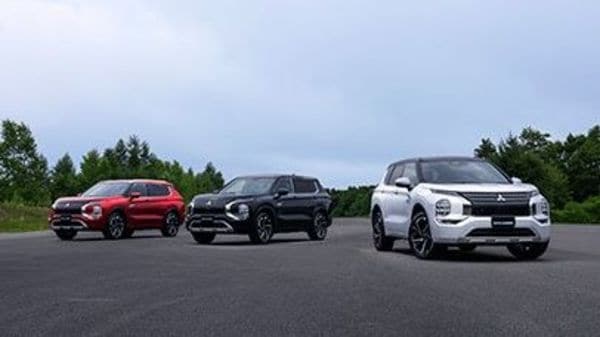 Mitsubishi said it has designed new Outlander PHEV under its new design concept keeping in mind the new generation of buyers.

Mitsubishi Motors Corporation (MMC) has revealed the design of its all-new plug-in hybrid (PHEV) Outlander crossover SUV and it will make its global debut on October 28 through a virtual premiere. The automaker has announced that it will start the sales of the vehicle by mid-December in Japan.

Mitsubishi shared that it has designed the new Outlander under its new design concept keeping in mind the new generation of buyers who often tend to prefer bolder visual cues on the outside. The automaker has upgraded the front-end design with an evolved dynamic shield to make the car look more aggressive yet stylish. It will also sport thick horizontal accents extending from the front to the rear end, giving it clean character lines. The vehicle will come with 20-inch wheels with front and rear fender flares that will make it more performance-oriented.

The rear of the new Outlander PHEV will sport horizontal themed taillights extending to both edges of the car to give it a more accentuated look from the back.

The automaker has also updated the interior of the car. The cabin will feature a horizontally sculpted instrument panel which will make it easy for the user to understand the position of the car while driving. The centre console too has undergone significant changes to sync with the new design. The brand, for the door panel, has provided soft padding covering a wide area. The monitors and gauges have been designed to make it easier for the driver to see them. The selectors, dials and switches have been designed to give the user a confident grip and operation, informed the company.

Mistubishi conveyed that the vehicle will come in 10 colour options and that this number includes the diamond colour series. These will have hues such as Red Diamond, White Diamond, and the new Black Diamond.

The company has not revealed much about the technical specs of the car though.

The Outlander PHEV made its global debut in 2013 and Mitsubishi had then claimed it as the world's first plug-in hybrid SUV. It featured a twin motor 4WD system and a high-capacity battery that included a 100V AC power supply.