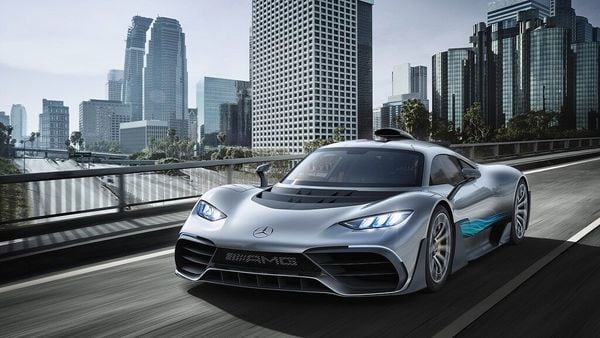 Mercedes AMG Project One hypercar made its global debut in 2017.

The Mercedes AMG Project One, introduced as a concept car at the IAA Mobility Show in Frankfurt in 2017, is finally entering production in the middle of next year, according to reports. The Mercedes AMG hypercar has witnessed multiple delays due to challenges that arose in the process of adapting a F1-derived hybrid powertrain for the roads.

The much-awaited Project One model will derive its power from a high-performance plug-in hybrid drive system that comes directly from Formula 1. One of the major challenges that the team faced during its making was to bring down the idle speed of mid-mounted V6 engine's to 1,200 rpm from Formula 1 engine's 5000 rpm. The engineers described it as a ‘tremendous challenge.’

Mercedes AMG Project One will come with one hybrid, turbocharged combustion engine with a total of four electric motors. The two motors will power the front wheels whereas one has been integrated into the turbocharger. Another motor has been directly installed on the combustion engine by the automaker. With an all-wheel drive and with its 1.6-litre turbo V6 under the hood, the car will sport a massive power output of over 1,000 horsepower.

(Also read | After EQS, Mercedes-Maybach’s next electric concept car to debut on December 1)

When the car made its debut four years ago, AMG claimed that Project One will be capable to sprint from zero to 200 kmph in less than six seconds and will come with a top speed over 350 kmph. This high-performance car will have only 275 units and all of these are reportedly sold out.