The LEGO Speed Champions McLaren Elva features a driver minifigure wearing race suit, helmet and with a wrench.The 263-piece playset comes with a lot of detailing such as the Active Air Management System vents.
By : HT Auto Desk
| Updated on: 02 Jun 2021, 10:45 AM 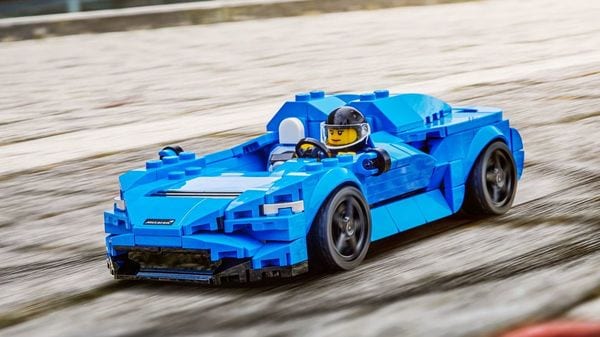 McLaren and LEGO have joined hands to add another build-and-store scale model to the the latter's supercar garage - McLaren Elva LEGO Speed Champions model. This is not the first product from the duo but surely on of the cheapest McLaren supercars that one can buy, costing just £17.99 ( ₹1,800 approx). It is a true replica of its real-life counterpart.

The 263-piece playset thrills car enthusiasts and kids alike, challenging them alike to explore and build the open-top speedster. Just like its real-life sibling has no roof, windscreen or windows for a thrilling driving experience, the LEGO McLaren Elva is a true copy in these terms. For the lack of a windscreen, the original Elva uses its Active Air Management System (AAMS) that uses aerodynamics to control the air, creating a ‘bubble’ around the occupants and sheltering them from the oncoming wind.

For the aesthetics, the LEGO McLaren Elva also features a McLaren driver minifigure wearing race suit, helmet and wrench, inspired by McLaren Automotive’s Principal Development Engineer for Ultimate Series, Rachel Brown. She has been a part of various McLaren vehicle projects such as the Elva and Senna GTR, right from the concept to production and managing elements such as track and aerodynamic wind tunnel testing.

McLaren and LEGO Group have a history of collaborations. Other McLaren supercars in the LEGO garage include the McLaren P, the 720S, McLaren Senna and the Senna GTR.