Recovery in rural markets and demand for smaller vehicles may come to the aid of car makers in India.Both of these factors play into the strengths of Maruti Suzuki in the country.
By : HT Auto Desk
| Updated on: 18 Jun 2020, 09:47 AM 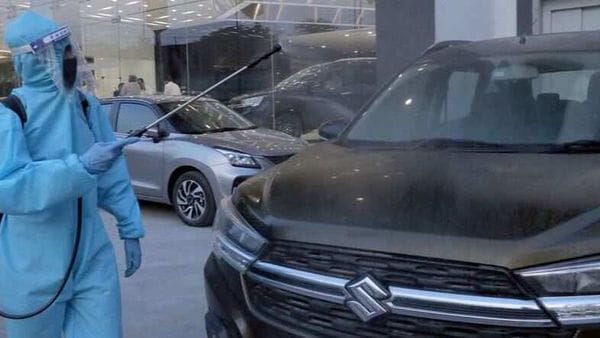 A vehicle being sanitized at a Maruti Suzuki showroom.

Car manufacturing companies have never faced challenges of the nature that has stared at them over the course of the past several weeks since India imposed a lockdown to check the spread of Covid-19 pandemic. Manufacturing, service and sales nosedived to record levels as the world shut doors to stay safe. And although the number of positive cases continue to surge in India at least, the easing of restrictions has allowed companies to gradually resume operations with the hopes that demand would trickle its way to some semblance of normalcy. In such precarious times, Maruti Suzuki may be slightly better poised than its rivals with popularity of smaller cars and in demand in the rural sector possibly providing the metaphorical morphine for the deeper pains.

Mint recently reported that Maruti Suzuki is looking at returning to putting out over 100,000 units of vehicles each month from July onwards. The report attributed this to three people in the know of company's plans, one of whom said that entry-level cars are gaining traction and that Maruti has asked its suppliers to up the ante.

While the company has not officially commented on plans related to upscaling production, Maruti Suzuki's plants in Haryana and Gujarat had already started production in a phased manner over the last few weeks.

What could possibly help Maruti Suzuki in its path towards recovery is the expected rise in demand for smaller vehicles. The company's core strength lies in the popularity that its cars in this segment enjoy with the likes of Alto, S-Presso, WagonR, Celerio and even Swift being hot sellers. Alto, in fact, recently celebrated 16 years of being the best-selling car in the country. Swift has had cumulative sales of 2.2 million units over the course of its 15-year presence in the country.

Additionally, a decent monsoon may also revive sentiments in the rural market which could potentially help as well.

Past numbers and weather predictions aside, at a time when analysts predict sales of passenger vehicles to shrink by 25% in fiscal 2021, the small car segment and demand from the rural market remain two rays of hope for many OEMs. And both of these are where Maruti is at its strongest and may fare better than its rivals.