Maruti Suzuki began exporting cars from India to other countries back in 1986.Maruti had exported one million cars by 2012. The second million took all of eight years.Maruti is presently exporting a total of 14 models in 150 variants to around 100 countries.
By : HT Auto Desk
| Updated on: 27 Feb 2021, 10:56 AM 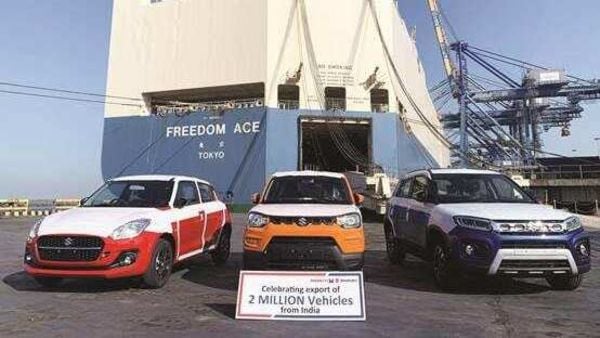 Swift, S-Presso and Vitara Brezza units line up at Mundra Port in Gujarat for export to the South African market.

Maruti Suzuki on Saturday announced it has now exported more than two million cars from its facilities in India to foreign markets. It took the country's largest car maker around 34 years to reach this significant milestone with the first large batch of cars being sent to Hungary back in 1986.

The two-millionth mark was recently reached when Maruti Suzuki sent a batch of S-Presso, Swift and Vitara Brezza models to South Africa from the Mundra Port in Gujarat. And while the company took 26 years to hit the first million-mark in exports, the next million has come up a whole lot quicker.

A large chunk of exports that made up Maruti's first million units were cars dispatched to markets in Europe. Since 2012, the company informs that it began focusing on emerging markets in Latin America, Africa and Asia regions. "Maruti Suzuki has been exporting vehicles for past 34 years much before India became a prominent player in the global automobile business," said Kenichi Ayukawa, MD and CEO in a press statement issued by the company. "This early global exposure helped the Company enhance its quality and attain global benchmarks."

Ayukawa claims Maruti Suzuki has managed to gain a firm foothold in countries like Chile, Indonesia, South Africa and Chile where models like Alto, Baleno, Dzire and Swift have emerged as popular choices.

Maruti is presently exporting a total of 14 models in 150 variants to around 100 countries. "Vehicles manufactured at our facilities in India have found high acceptance owing to global standards of quality, safety, design and technology," states Ayukawa.

Maruti also has plans of quickening the pace of product launches and is eyeing new segments to garner more attention. The Jimny may be a point of focus and is already being manufactured in India for foreign markets. And while the company hasn't confirmed if the car will also be launched here, it has indeed managed to generate a fair bit of interest among enthusiasts and the vehicle-buying audience.