The Lotus Emira has already entered the pre-production stage at Lotus' facility in Hethel, England, after the company received an investment of more than £100 million.
By : HT Auto Desk
| Updated on: 09 Jun 2021, 09:23 AM 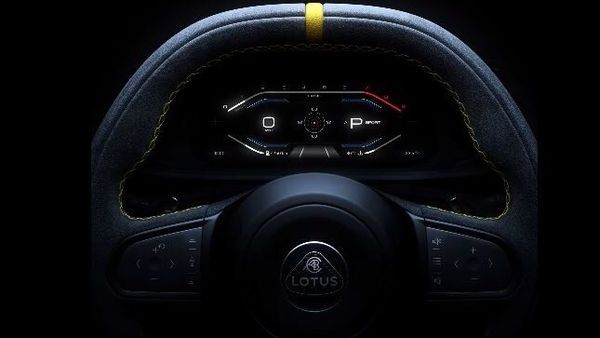 Lotus has dropped a new teaser of its Emira hypercar - its last combustion engine car that is set to make a world premiere on July 6. The sports carmaker has plans to go all electric by 2028 and Emira will be the final one from its stable to use only fossil-fuels.

The teaser shows a part of the Emira's interior - the upper half of its sporty steering wheel clad in Alcantara and featuring yellow contrast stitching and a 12'o clock strip mark. The centre of the steering features the updated Lotus logo and also houses a host of control functions.

One noteworthy element on the steering are the paddle shifters behind, indicating that the Emira will be available with an automatic transmission gearbox. However, it is expected that Lotus will also offer the manual transmission option on its last ICE car along with a clutch pedal. Another highlight seen in the teaser is the configurable digital instrument cluster.

The Emira has already entered the pre-production stage at Lotus' facility in Hethel, England, after the company received an investment of more than £100 million. The automaker sees this as a milestone in its Vision80 journey.

The all-new Emira will replace Lotus' aging lineup of Elise, Exige, and Evora. The sports car could reportedly get a turbocharged 2.0-liter four-cylinder engine. The V6 3.5-liter unit from the Evora could be made available for the purpose, Motor 1 reported.

Lotus, which has taken the first steps towards electrification and sustainable mobility has also initiated the pre-production process of its first pure electric hypercar Evija, along with the Emira. The Evija will have a limited production run of 130 cars and sell for around two million pounds each.

The Geely-owned company earlier this year announced that it will invest more than two billion pounds ($2.8 billion) in new technology and in massively expanding production of its sports car models, as well as achieving its electrification target.