Lockdown 'lunatics': 2 arrested for racing Audi RS6 at 323 kmph while filming it

The driver of the vehicle uses one hand to steer the vehicle and the other to film the speedometer.It is suspected that the internal speed limiter on the car may have been removed because the officially-stated top speed figure stands at approximately 250 kmph.
By : HT Auto Desk
| Updated on: 13 Jun 2020, 16:46 PM 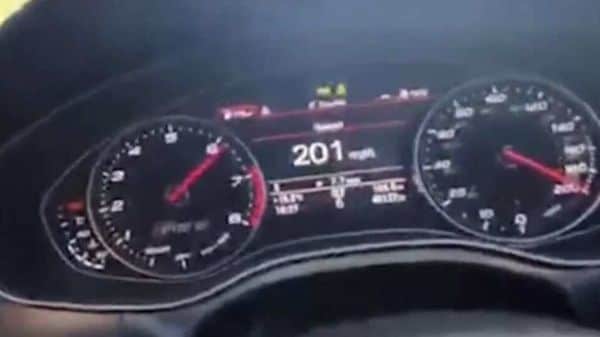 In a brazen act of putting their own lives in danger as well as the lives of others at risk, two people have been arrested after they filmed themselves driving an Audi RS6 at a speed of 201 mph (approximately 323 kmph) during lockdown in the United Kindom. They had reportedly posted the video online and it went viral on social media which also helped police officials launch an investigation and subsequently nab the accused.

The dangerous driving incident reportedly took place in the month of May on M23 motorway in UK's Sussex. The national speed limit here is capped at 70mph (112 kmph) but the accused were racing their car at three times that restriction. What was even more shocking is that the person in the vehicle uses just one hand to control the steering while is reportedly using his other hand to film the drive.

The extremely capable Audi moves from 61 mph to 116 mph in around five seconds with the speedometer continuing to rise thereafter. It is clear in the video that the driver also did not pay any heed to lane-keeping rules and makes the car weave in and out of the few other cars that were ahead of it. It is also suspected that the internal speed limiter on the car may have been removed because Audi's UK website pegs the car's top speed at 155 mph. Even an optional Dynamic pack Plus would only take up the top speed to around 189 mph.

BBC reported that both accused are 38 years old and while one of them was released, the other is now out on conditional bail till July 9.

The incident reportedly occurred between southbound between Gatwick and Crawley in West Sussex and the footage was posted online on May 22. This prompted police officials to search for the vehicle and eventually seize it.

Lockdown over the past several weeks and across several countries to check the spread of Covid-19 pandemic has led some to consider it as a free license to break road rules. It is believed that these few have stepped out to take advantage of empty roads which is not just a violation of lockdown rules but has also often prompted road rule violations.