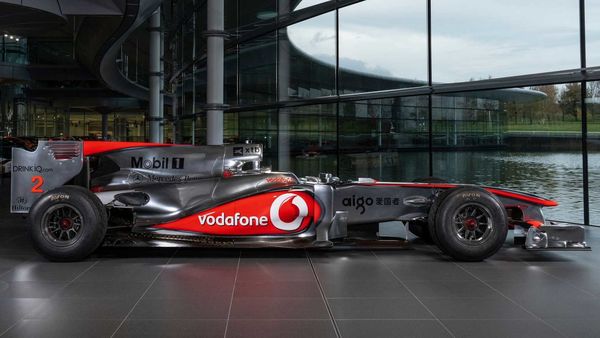 Formula One driver Lewis Hamilton's McLaren MP4-25A from the 2010 Turkish Grand Prix was sold this weekend for a whopping $6.6 million. It also most broke the record of Michael Schumacher's 2001 Ferrari F2001 that was sold in 2017 at $7.5 million.

The auction was held by RM Sotheby during the 2021 British Grand Prix this weekend at Hamilton's home track in front of nearly 140,000 race enthusiasts. This was the second most expensive F1 car sold at an auction. It was also the first F1 car driven by Lewis Hamilton to go under the hammer.

Fetching $6.6 million was certainly an indication that one day Hamilton's car could set a new auction record, even break Schumacher's record as well.

The McLaren Formula One car was not only auctioned at the British GP, but the auto company performed demonstration laps around the Silverstone circuit with this model. It was developed by McLaren Racing's Heritage team with McLaren and Mercedes technicians on hand for full support.

The car was piloted at Silverstone circuit by McLaren test driver Rob Garofall, showcasing the crowd its 2.4-litre Mercedes-Benz FO 108X V8 engine's performance. This was certainly quite a treat for the crowd to hear the V8's sound compared to the current V6 engines the F1 teams use now.

Interestingly, this particular McLaren F1 car has a history beyond the 2010 Turkish GP. It was instrumental in helping the team to grab the second spot in Constructor Standings. It also helped Hamilton to take the second position in the 2010 Chinese Grand Prix. Jensen Button used the same car in the 2010 season's final race, where he finished third.

Commenting about the car's auction, Shelby Myers, RM Sotheby's car specialist and global head of private sales, said that Lewis Hamilton's achievements in the Formula One are so remarkable that they may never be bettered, and so cars with which he is associated are likely to be the most coveted in the decades to come.