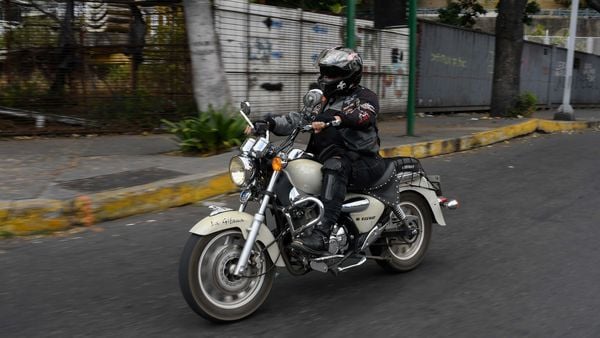 A member of female motorcycle club Ratgirls rides her motorbike along a street in Caracas.

When she rides alone around the streets of Caracas astride a Suzuki GS500, Ana Julia Mosquera tucks her long hair inside her helmet and wears baggy clothes.

"Sometimes I prefer to ride looking like a man, for safety," she says.

Not just for safety, but also to avoid comments she and her fellow members of the Venezuelan all-female Ratgirls biker group suffer on a regular basis.

Mosquera has become immune to sexist quips like: "That's a lot of bike for you."

The 23 members of the Ratgirls aren't looking to start a fight between the sexes, but they want respect from the biker world dominated by men.

"Crazy things always happen to us in the street," said Mosquera, a 32-year-old audiovisual producer and Ratgirls president.

The Ratgirls, who were formed in 2014 after the mixed Rats biker club banned women, are identified by a black leather jacket with orange stripes and embroidered with the words: "Long life."

Safety in numbers is crucial in a city like Caracas, one of the most violent in the world.

Three times someone has tried to steal Mosquera's bike. She even keeps its battery locked inside a cage.

According to government statistics, Venezuela's murder rate in 2019 was 21 per 100,000 inhabitants.

But the Venezuelan Observatory NGO says the figure was actually 60: 10 times the global average.

The Ratgirls ride in groups to reduce the chance of being the victims of crime.

Several times they've been mistaken for the notorious "colectivos" -- civilians armed by President Nicolas Maduro's regime who also ride around on bikes.

Oil-rich but cash-strapped Venezuela is in the grip of five years of recession and a chronic economic crisis that has left millions in poverty and shortfalls in basic necessities such as food and medicine.

But Maduro's socialist regime has maintained price controls on fuel -- a great advantage for the Ratgirls, according to Mosquera.

The Ratgirls aren't just trying to show off, though, theirs is the kind of passion that leaves hands dirty.

Some, like Jennifer Rodriguez, are learning to fix their bikes themselves.

She thinks nothing of tackling her Keeway Superlight 200 to mend a problem.

Half Spanish and half Venezuelan, Rodriguez joined the club just over a year ago.

"I started riding around with them and I stayed, now they're my family," said the single mother with a 10-year-old daughter.

Although the Ratas barred women from its club, the two groups still take part in events together, said Jose Gonzalez, the vice-president of the men's club.

The 47-year-old, a professional photographer, acknowledges there's a "macho culture" in Venezuela that opposes women bikers.

"The Ratgirls have done better than other (male clubs), they ride more and have more activities than many (male) clubs," said Gonzalez.

Mosquera says the Ratgirls "have a motto: no-one is more than anyone if they don't work harder than the other."

Maryelitza Sanchez, a 48-year-old mother-of-two, learnt to ride a motorcycle out of necessity to get around town.

"The only thing I'd ridden before in my life was a bicycle," the personal trainer told AFP.

She'd always been attracted to motorbikes but her parents prevented her from riding one out of fear.

After she got married, her husband was also against the idea.

"We went around in a car," she remembers.

Everything changed two years ago when she got divorced and needed to use the collapsed metro system in Caracas.

"Every day I went through a different issue in the metro: there was always a problem, I arrived late or not at all," she said.

After falling twice from her $300 Bera 150, she overcame her initial fears.

"It's a unique feeling of freedom, of dominion, of control, of power. I feel powerful when I'm on the motorbike," she said.