Union Minister Piyush Goyal said setting up semiconductor industry in India besides strengthening the shipping industry will help push the Aatmanirbhar initiative of the government.
By : HT Auto Desk
| Updated on: 20 Aug 2021, 09:02 AM 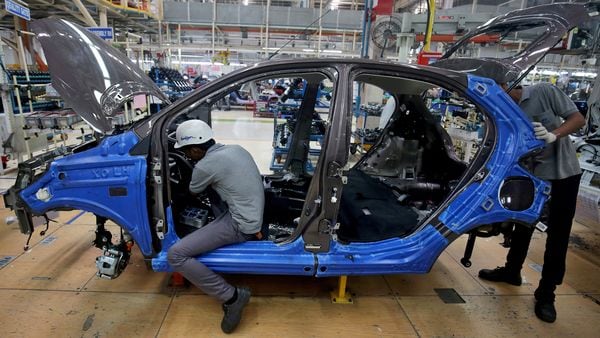 FILE PHOTO: Workers assemble a Tata Tiago car inside the Tata Motors car plant in Sanand, on the outskirts of Ahmedabad.

Global chip crisis has already forced some of the biggest names in the auto industry to revise their vehicle production targets for next month. As the semiconductor crisis threatens to worsen in coming days, India is planning to find a solution to the problem, at least for the Indian car and two-wheeler manufacturers.

The Centre is keen to set up semiconductor industry in India in an effort to find a lasting solution to the chip shortage issue. Currently every vehicle manufacturer is facing the problem as they rely on imported auto parts. Delay in getting the auto parts for manufacturing has also led to piling up of pending deliveries, and has shot up waiting period for new vehicles as well.

Setting up local industry will not help to mitigate the crisis, but also help the government and the automakers to save precious foreign exchange. Union Commerce and Industry Minister Piyush Goyal said, “There is a worldwide shortage of semiconductors and the government is very much focused on bringing the semiconductor industry to India… the government is committed to supporting both these sectors."

(Also read: Toyota forced to cut down vehicle production globally by 40% due to chip crisis)

Goyal's reaction to the global chip crisis came days after Tata Group said it is thinking about entering the semiconductor segment. The group is planning manufacturing the critical components in the semiconductor industry.

Tata Motors, one of India's largest passenger and commercial vehicle manufacturer, recently revealed its plans to address the chip shortage crisis. It has announced several measures, including making changes in its product configurations and buying chips directly from stockists. It is also looking to use different kinds of chips in components where the supply is most affected.

(Also read: Volkswagen may cut production due to chip crisis, to follow Toyota)

Union Minister Piyush Goyal also said creating the semiconductor industry and strengthening the shipping industry will help push the 'Aatmanirbhar' or self-reliance initiative of the government. He also hopes that large corporates will be taking interest in the shipping industry, which will give the right impetus to the crucial sector for the country's foreign trade.

Goyal also acknowledged that exim trade is facing issues on the container front due to global problems. He assured that the government will try to be self-sufficient in manufacturing new containers and the state-owned Concor has come out with a policy for the same.