Honda to sell only EVs in China from 2030; launch 10 models under new EV brand

Honda's new electric vehicle brand in China - the e:N Series - will roll out 10 models in the country in association with partners GAC and Dongfeng Motor over the next five years.Globally, Honda aims to phase out combustion engine cars by 2040.
By : HT Auto Desk
| Updated on: 14 Oct 2021, 10:08 AM 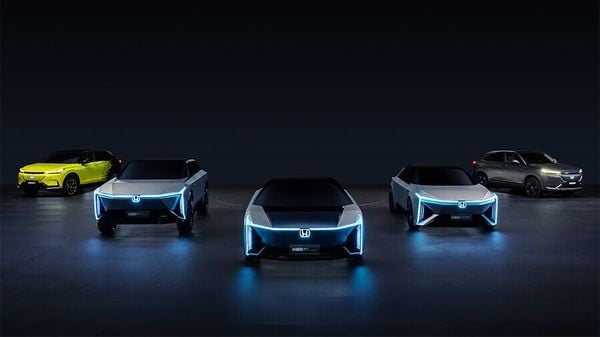 Honda's e:N Series of electrified models that it will introduce in China over the next few years.

Under the new EV brand, Honda will roll out 10 models in association with partners GAC and Dongfeng Motor over the next five years. The planned new electrified models will use a new vehicle operating system and are being developed based on an auto product platform designed specifically designed for electric vehicles.

Sales of the new Honda e:N Series will begin with the e:NS1 and e:NP1 models in China from next year. Both these models will feature sporty driving dynamics along with a sharp exterior styling. The company will also build new dedicated EV production plants at GAC Honda and Dongfeng Honda, starting in 2024, and eventually export its e:N Series models from the nation.

Honda is also working on three concept models to expand its e:N Series. The concepts are named e:N COUPE Concept, e:N SUV Concept and e:N GT Concept, and aims to start sales of these new models within the next five years.

Globally, Honda aims to phase out combustion engine cars by 2040. In April this year, the company announced its new goals to realize both carbon neutrality and zero traffic collision fatalities by 2050. Further, the carmaker announced its electrification target in all major markets including China, which is to increase the ratio of EVs and fuel-cell vehicles within overall unit sales to 40% by 2030, to 80% by 2035, and then to 100% by 2040.

The carmaker's China push is a step in the right direction to achieve these targets speedily and steadily.