Home Auto News Greek Pm Gets Inside The Most Affordable Tesla. And Twitter Can't Keep Calm

Greek PM gets inside the most-affordable Tesla. And Twitter can't keep calm

Greece PM Kyriakos Mitsotakis may have ditched high-end luxury cars with cutting-edge security for a Tesla Model 3.Mitsotakis had earlier said he wants to ramp up the process of EV adoption in Greece.
By : HT Auto Desk
| Updated on: 12 Oct 2020, 07:57 AM 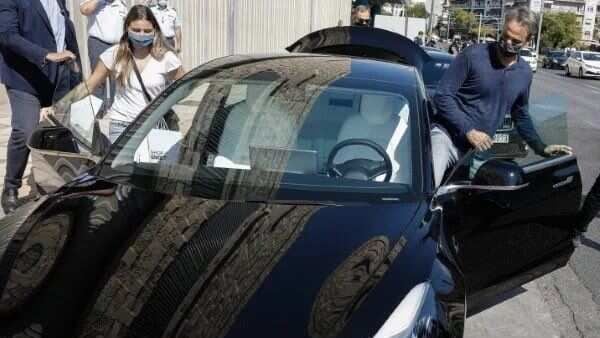 This photo was tweeted by @jannis134

The rising popularity of Tesla electric vehicles is well established with the US car maker going from strength to strength, especially in recent times. Leading the EV market, and by quite a distance, Tesla has not only made traditional car makers sit up and take note but also play a catch up game because EVs are being seen as the next big thing in the world of mobility. Often, popular figures inside an EV does a whole lot to improve the image of such vehicles and in Greece, it is the country's Prime Minister who appears to be leading from the front.

Kyriakos Mitsotakis was recently seen getting inside a Tesla Model 3, the most affordable Tesla product, and the photo soon became viral with even Tesla CEO Elon Musk hitting the 'like' button on the micro-blogging platform.

Tesla had only recently opened a pop-out store in Athens and is readying plans for full-scale operations here. While it isn't clear if Mitsotakis bought the EV or was just getting inside one for a test drive, social media is buzzing because at a time when political heads are almost always seen inside ultra luxury vehicles with cutting-edge security, the Greek PM appears fine with being seen inside an EV that is targeted towards the masses.

Mitsotakis may be leading by example, especially after he had unveiled tax incentives to boost the use of electric cars, motorcycles and bicycles earlier this year. Greece has only about 1,000 EVs which is just 0.3% of total fleet on its roads. This is significantly lower when compared to several European countries.

Mitsotakis wants to change all of this and had said that the new tax incentives are with the objective of having at least one in every three car on roads to be powered by battery. (Full report here)

Tesla's entry in Greece could also significantly popularize EVs, also because of the massive following the company has around the world.