Union Petroleum Minister Dharmendra Pradhan says fuel rates are problematic for people but ₹35,000 crores is being spent on Covid-19 vaccines in a year.Pradhan attacks Congress for blaming central government for fuel price hikes, asks why fuel prices are high in Congress-ruled states.
By : HT Auto Desk
| Updated on: 14 Jun 2021, 09:34 AM 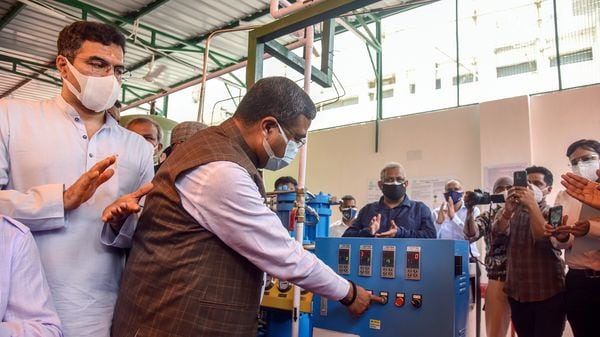 Union Petroleum Minister Dharmendra Pradhan on Sunday admitted that current rates of petrol and diesel are 'problematic' for people at large but also chose to highlight that the central government is saving money for welfare schemes in the country. Petrol and diesel prices have breached all-time highs and continue to surge without any sign of a relief in the horizon.

The spate of hikes in petrol and diesel prices have caused a massive political uproar with Congress leading the attack on the central government. The Congress, in turn, has been targeting for not providing relief in the form of taxes state governments impose in states where its party is in power. Asked about the rising fuel rates, Pradhan slammed Congress while also attempting to mount a defense. "I accept that current fuel prices are problematic for people, but be it central or state government, over ₹35,000 crores is being spent on Covid-19 vaccines in a year. In such dire times, we are saving money to spend on welfare schemes," he said. "Rahul Gandhi must answer why fuel prices are high in Congress-ruled states like Punjab, Rajasthan, and Maharashtra."

There is nothing new in political blamegame that tends to follow the upward price trajectory of petrol and diesel rates. Both central government as well as state governments impose taxes and levies on both fuels and these are the main factor behind varying prices across the country as well as one of the primary factors that make up the eventual price a conumer has to pay.

While the central government in the past has stated that international crude prices have a major say in daily rate revisions, many point out that the global rates currently do not justify the rate of petrol and diesel in India.

It, however, is true that taxes on petrol and diesel form a large chunk of revenues for central as well as state governments. In Covid times, when there have been lockdowns and restrictions, the importance of generating revenues from taxes on automotive fuel has become even more crucial - for central as well as state governments. As such, a respite is unlikely in the coming weeks.

Petrol rates have surged past three-digit mark, a first ever, in several cities in the country, including Mumbai. Diesel too, and for the first time ever, touched ₹100 per litre, in Rajasthan's Sri Ganganagar.

High fuel rates not only affect commuters paying for the two fuels but tend to drive up prices of commodities as transport costs increase significantly.