On Wednesday, Trump took issue with an image that circulated on social media of an apparent policy against Goodyear employees wearing MAGA attire.
By : Bloomberg
| Updated on: 21 Aug 2020, 09:06 AM 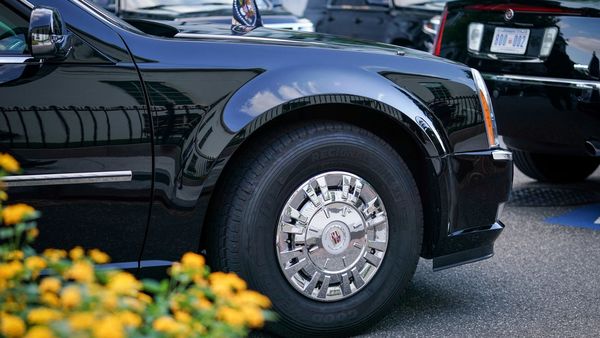 A Goodyear tire is seen on US President Donald Trump's presidential limousine, known as the Beast, parked outside the White House.

Goodyear Tire & Rubber Co postponed a virtual briefing on a new braking system a day after US President Donald Trump attacked the company by calling for a boycott of the American manufacturer’s tires.

A representative for Goodyear said during what was supposed to be a virtual press conference scheduled for Thursday morning that the meeting would be rescheduled for next week. While the spokeswoman didn’t specifically mention Trump, she referred to the flurry of news coverage about the company.

On Wednesday, Trump took issue with an image that circulated on social media of an apparent policy against Goodyear employees wearing “MAGA" attire -- referring to the president’s Make America Great Again slogan -- and other politically conservative messages. Goodyear said the visual was not created or distributed by the Akron, Ohio-based company’s corporate office, though it does ask employees to refrain from expressing support for political campaigns, candidates or parties as part of its workplace-harassment and discrimination policies.

Trump’s re-election challenger, former Vice President Joe Biden, said Wednesday that Trump had placed his own grievances above the welfare of Goodyear’s workers by calling for the boycott. The company has facilities in states including Arizona, Florida, Georgia, North Carolina, Texas and Virginia.

Goodyear shares dropped as much as 1.5% Thursday and have fallen almost 40% this year.