The solar rooftop project at Tata Motors' Pune plant is expected to produce nearly 45 lakh KWh of electricity in a year.The project has the capability to reduce carbon emissions by approximately 3,538 tonnes per annum.
By : HT Auto Desk
| Updated on: 14 Sep 2021, 14:10 PM

Tata Motors aims to generate 100 per cent renewable energy at its plants by 2030.

Tata Motors has signed a Solar Power Purchase Agreement with Tata Power in order to install and operate a three-Megawatts-peak (MWp) rooftop solar project at its passenger vehicle manufacturing plant in Pune. The move is aimed at conserving energy and achieving 100% renewable energy source for all its operations.

The solar rooftop project is expected to produce nearly 45 lakh KWh of electricity in a year, and has the capacity to reduce carbon emissions by approximately 3,538 tonnes per annum. With this, Tata Motors has taken another step towards conserving energy at its manufacturing facility and optimising the consumption of fossil fuels.

The move is also in line with the company's vision to mitigate climate change as well as reduce its operating costs. “Energy efficiency is at the core of our efforts and reducing GHG (greenhouse gas) emissions and the carbon footprint of our products play a vital role," said Rajesh Khatri, the company's Vice President - Operations, Passenger Vehicle Business Unit. 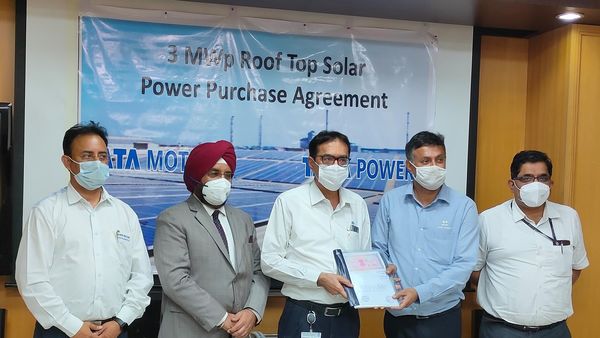 As a member of RE100 Climate Group of global corporates committed to achieving 100 per cent renewable energy in their operations, Tata Motors has taken several initiatives to make this possible. In the last fiscal year, the auto company's manufacturing plants in Pune and Sanand generated 26.10 million kWh of renewable electricity - 25 per cent of its total power consumption of 111.3 million units. This lead to a reduction in carbon emissions of 18,672 metric tons.

Tata Motors aims to generate 100 per cent renewable energy at its plants by 2030. Its latest move to install and operate a rooftop solar power project is a step in the right direction. As part of the ‘One Tata’ initiate of going green, the partnership with Tata Power represents both the companies' collective effort to lower carbon footprint. “We will continue to provide such future-focused green energy solutions and continue to strengthen our partners and customers by harnessing clean energy resources," said Ravinder Singh, Chief-Solar Rooftops Business, Tata Power.