The U.S. invoked the Defense Production Act to secure ventilator production from auto companies after Trump accused GM of moving too slowly and gouging the government.
By : Bloomberg
| Updated on: 09 Apr 2020, 09:57 AM 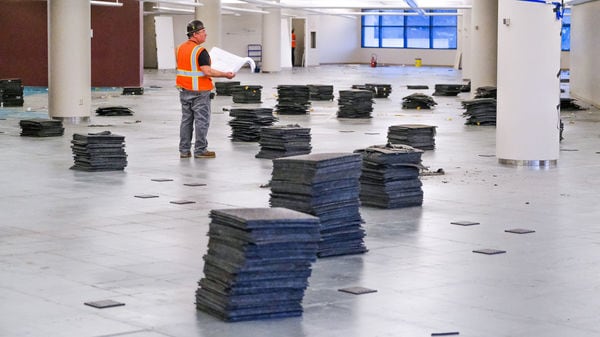 File photo: A worker stands inside the GM Kokomo, Indiana building that General Motors and Ventec Life Systems are converting into use for the production of Ventec ventilators in response to the spread of the coronavirus disease (COVID-19) in the U.S.

The U.S. awarded General Motors Co. and its partner Ventec Life Systems a $489.4 million contract to make 30,000 ventilators by the end of August, finalizing a deal that briefly was a point of contention for President Donald Trump.

Production will start next week, a GM spokesman said Wednesday, and the car maker and Ventec will deliver a fifth of the breathing machines they’re building for the Health and Human Services Department by June 1. The U.S. invoked the Defense Production Act to secure production from the companies after Trump accused GM of moving too slowly and gouging the government. He’s praised the car maker since then.

GM has been working with Bothell, Washington-based Ventec to boost the company’s production of ventilators used to help Covid-19 patients breathe while being treated for the respiratory disease. The automaker has converted an auto-parts plant in Kokomo, Indiana, to make the devices with paid volunteers from the United Auto Workers union.

In an effort reminiscent of the World War II-era “arsenal of democracy" movement, in which civilian manufacturing plants switched to making munitions, mass manufacturer GM paired up with specialty producer Ventec. Both companies had been working around the clock to find a way to build ventilators in mid March when Trump accused the car maker of dragging its feet, calling out Chief Executive Officer Mary Barra by name.

GM is now the first company with a U.S. contract to add to the national stockpile that the federal government maintains, which is expected to run short of medical equipment to dole out to states coping with the coronavirus pandemic.

(Also read: Coronavirus: Why making ventilators is a tough challenge for carmakers)

Before working with GM, Ventec was making at most 250 ventilators a month. To boost production rates into the thousands, Ventec needed GM’s help enlisting hundreds of parts suppliers to increase output, and the automaker is hiring 1,000 workers who will build the machines at the plant in Indiana.

GM is recruiting paid volunteers from its staff of 300 workers who make auto parts in Kokomo, plus others from a nearby metal stamping plant. But it still needs more people. The company has had at least 1,300 job applicants and is in the process of hiring and training workers in safety protocols, GM spokesman Jim Cain said.

The two companies will be making a scaled-down version of Ventec’s ventilator called the V+ Pro. It only provides ventilation, not other respiratory therapies featured in the company’s proprietary VOCSN system, Cain said.

The Centers for Disease Control and Prevention manages a stockpile that currently has between 12,000 and 13,000 ventilators, according to a report from the Bloomberg School of Public Health at Johns Hopkins University.

The problem is that the stockpile consists of three different ventilators and only one of them, the LTV1200 made by Becton Dickinson and Co., is ideal for patients with Acute Respiratory Distress Syndrome, which is typical for the most critical Covid-19 patients, Lewis Rubinson, chief medical officer at Morristown Medical Center in New Jersey, said in an interview. Rubinson worked as a consultant and later was chief medical officer for the U.S. DHHS and its National Disaster Medical System, a role in which he helped build out the country’s strategic stockpile.

Critical care ventilators were added to the national stockpile of emergency supplies starting in 2005 in response to the avian flu, Rubinson said. But at the time, no one planned on a pandemic that would hit multiple countries at once. So the government’s equipment inventory were not ready for an emergency of this size, he said.