GM said it was extending downtime at its plants in Fairfax, Kansas; Ingersoll, Ontario; and San Luis Petosi, Mexico through mid-March
By :
| Updated on: 09 Feb 2021, 08:22 PM 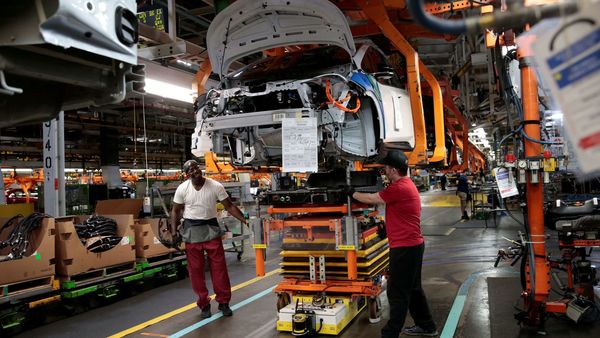 General Motors Co said on Tuesday it was extending production cuts at three global plants through at least mid-March and building but leaving incomplete vehicles at two other factories due to the global semiconductor chip shortage.

GM did not disclose how much volume it would lose in its latest action or which supplier and vehicle parts were affected by the chip shortage, but said the focus remains on keeping production running at plants building its highest-profit vehicles - full-size pickup trucks and SUVs. GM said it intends to make up as much lost production as possible.

"Semiconductor supply remains an issue that is facing the entire industry. GM’s plan is to leverage every available semiconductor to build and ship our most popular and in-demand products," GM spokesman David Barnas said.

GM said it was extending downtime at its plants in Fairfax, Kansas; Ingersoll, Ontario; and San Luis Petosi, Mexico through mid-March, when it will reassess the situation, he said. In addition, GM will build but leave incomplete for later final assembly vehicles at plants in Wentzville, Missouri, and Ramos Arizpe, Mexico.

Earlier this week GM idled the three factories where it extended downtime, and said it would halve production at a plant in South Korea.

Asian chipmakers are rushing to boost production, but warn the supply gap will take many months to plug. German chipmaker Infineon warned things will get worse in the near term.