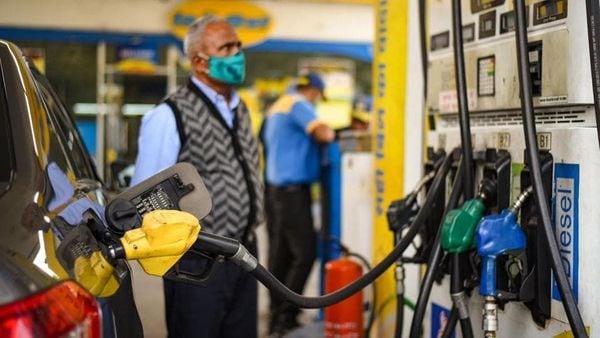 File photo: A man looks at the counter as a vehicles is filled with fuel at a petrol pump in New Delhi, India.

With a shoot up in price of fuels on Saturday, diesel breached the Rs-100 mark in Mumbai. Price of per litre petrol was hiked by 30 paise per litre and diesel by 35 paise a litre, as per a price notification of state-owned fuel retailers.

Fuel prices have been hiked for four days in a row, and this is the fifth consecutive day of price hike that has pushed fuel rates to a new record high. Diesel in Mumbai now costs ₹100.29 per litre while in Delhi, it costs ₹92.47 for a litre.

The price of petrol in the capital rose to its highest-ever level of ₹103.84 a litre and the price in Mumbai is ₹109.83 per litre. Fuel prices differ from state to state depending on the local taxes applied.

India imports around 85 per cent of its total fuel demand from overseas countries. Thus, changes in the international crude oil market affects the domestic fuel costs in the country. Further, a high excise duty rate in the country makes things worse. Other components that increase the price of petrol and diesel here include variable VAT amounts imposed by the state governments, dealer commission, freight charges etc.

In the last two years, excise duty on fuel has increased substantially. This has resulted in incessant hike in motor fuel prices. Even earlier this year, petrol and diesel prices have seen a massive spike.