Formula 1: Leclerc puts Ferrari back on top ahead of Hungarian Grand Prix

Ferrari's Charles Leclerc emerged as the quickest among all in the initial practice session in Budapest. However, it was Leclerc's teammate Carlos Sainz who set the pace during the first practice run at Hungarian Grand Prix on Friday.
By : HT Auto Desk
| Updated on: 30 Jul 2022, 11:35 AM 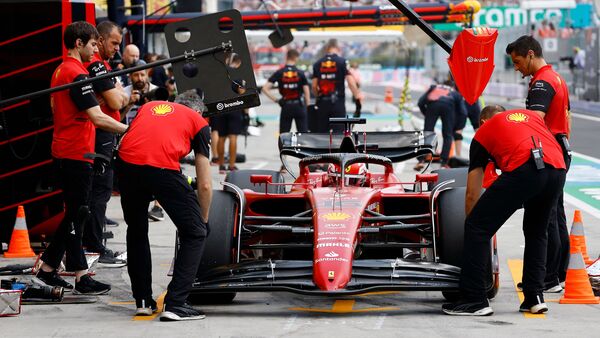 Ferrari continues to shine at the practice sessions at this season's Formula 1 with yet another stellar performance on Friday. Ferrari driver Charles Leclerc helped the Italian racing team to end on top in the first practice session at Budapest, ahead of the Hungarian Grand Prix on Sunday. Leclerc finished as the fastest driver with his teammate Carlos Sainz taking the honours in the first run of the day. This puts the Ferrari team in a strong position ahead of Saturday's qualifier to decide the final pole position for the weekend.

Leclerc clocked one minute 18.445 seconds at the practice run in Budapest after Sainz led the first session clocking 1:18.750. At the French Grand Prix last week, Leclerc secured the pole position, but had crashed out despite leading the race. Sainz, who was serving a 10-spot penalty, could not recover to get a podium finish.

Red Bull's Formula One championship leader Max Verstappen predicted Ferrari would be hard to beat in Hungary, unless rain mixes things up, after title rival Charles Leclerc was fastest for the Italian team in Friday practice.

Ahead of the Saturday's qualifier, Carlos Sainz said his car felt good. However, his second run was not as smooth as the first one. "We tried a couple of changes in the set-up to evaluate which direction is best to take for tomorrow and the race. We lost the feeling a bit, but we are in a good place in terms of car balance and pace," said Sainz.

Ferrari is aiming to finish on top after losing out in France. Red Bull Racing, the leader in both driver and constructor standings this season, acknowledged that Ferrari will be the team to beat in Hungary. "I think the Ferraris will be ahead of us this weekend and it will be hard to beat them. In the dry we might struggle to compete, but it could be a different story in the rain," said Max Verstappen, the defending world champion from Red Bull.

Verstappen is 63 points clear of Leclerc in driver standing after 12 races. He finished second and fourth in the first two practice sessions on Friday. McLaren's Lando Norris emerged as the fourth fastest in the practice session on Friday and his teammate Daniel Ricciardo was fifth.