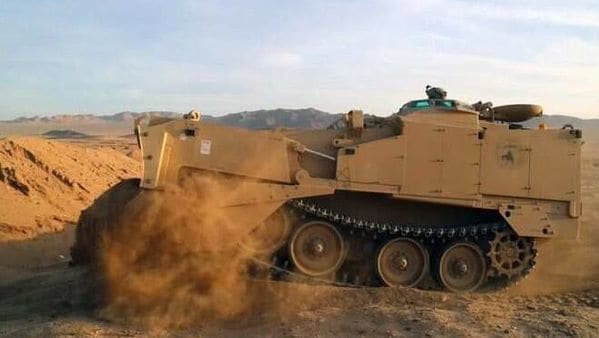 Its compact dimensions allow the M9 ACE to be easily transported by air. Its 300-kilometer range and top speed of about 50 kmph makes it a solid proposition during engineering as well as offensive missions.

US Marines operate in a wide variety of hostile conditions around the world, often dealing with enemy fire in terrains which are extremely challenging. While the vehicles used by the Marines are often top-of-the-line fighting machines, no other can perhaps boast of as much attitude as the M9 Armoured Combat Earthmover or M9 ACE. This no-nonsense vehicle has reportedly been put to use for achieving a wide variety of objectives that are crucial to mission success.

The M9 ACE is indeed an ace up the sleeves of the Marines courtesy its capabilites to perform both engineering as well as offensive tasks. So, while the M9 ACE is put to the use to help with tasks of dozing, scraping, grading, towing and hauling, it has proved its abilities to function as a barricade vehicle for friendly forces against enemy fire as well as for destroying enemy fortifications.

What helps the vehicle thunder is an aluminium-welded structure with the engine and driving compartpent positioned at the rear. The driver's compartment receives extra armour while high-quality steel is also used to give the shell of the M9 ACE more strength. Powering it all is a Cummins V903C eight-cylinder diesel engine which gives it a top speed of around 50 kmph.

Weighing approximately 16,000 kilos, the vehicle obviously belongs more to the tank family than to the military transport fleet but it does have a cruising range of around 300 kilometers. It also has limited capabilities to wage in water, a feature which has been invaluable in removing water-based obstacles in enemy territory. With a bulldozer blade for a mouth, the M9 ACE has a menacing face and while it has been in service since the 1980s, the newer versions even reportedly feature a nuclear, biological and chemical suite.

While first used in the 1991 Persian Gulf War, the compact dimension of the M9 ACE has seen it being transported by air for operations in hostile territories on several occasions.