Ford has mentioned that due to high demand, the current model year of Mustang Mach-E is no longer available for retail order.
By : HT Auto Desk
| Updated on: 20 Apr 2022, 12:14 PM 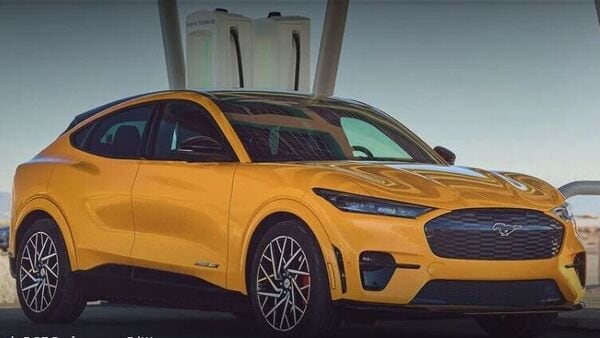 Ford Motor has stopped accepting orders for all 2022 Mustang Mach-E models, just six weeks after it closed order books for the electric vehicle's two most popular trim levels. The carmaker has been selling the 2022 Mustang Mach-E in Select, GT, Premium, and California Route 1 trims, and initially stopped orders for the Premium and California Route 1 variants.

On its website, the carmaker mentioned, “Due to high demand, the current model year is no longer available for retail order. Limited inventory may be available at selected dealers. Contact your dealer for more information." The carmaker is clearly focusing on the 2023 model year of the Mustang Mach=E at the moment. However, there are no details available as of now about the updates that will be included in the new model year.

To make up for the lull in sales, Ford is looking to boost production of the Mustang Mach-E moving forward. In December last year, the company's CEO Jim Farley said the carmaker was struggling to keep up with “incredible demand" for the EV and plans to build 200,000 units during the 2023 calendar year, almost triple the number of Mach-Es that were built in 2021.

Meanwhile, Ford is readying the F-150 Lightning for its official launch on April 26. Recently, Ford's Vice President of Global EV Programs, Darren Palmer, hinted that the model could come with a few tricks up its sleeve. In a Linkedin post, Palmer showed a video of a racing game being played on the dashboard of the F-150 Lightning.

This implies that the F-150 Lightning pickup will be launched with a handful of mini-games, which can be played when the truck is in parking mode and occupants have some time to kill. By adding games to its dashboard as a source of entertainment, Ford is following Tesla's lead.