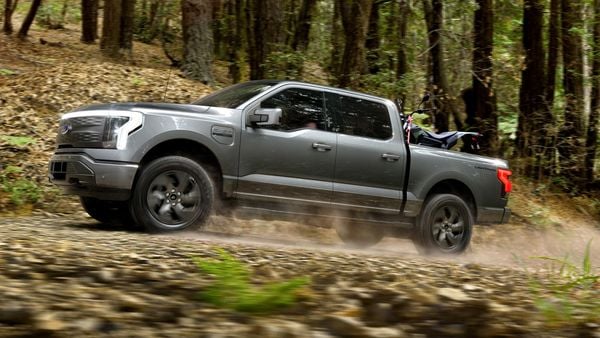 Ford F-150 Lightning electric pickup truck will come with a range of 370 kms on single charge.

Ford has reportedly received 1.30 lakh reservations for its F-150 Lightning electric pickup. Ford had unveiled the electric vehicle earlier this year and the company started the reservation with a refundable amount of $100.

Regarded as a formidable player in the electric pick-up truck space and one that could be strong rival to the upcoming Tesla Cybertruck, Ford's F-150 Lightning reservations are a good indication of the popularity of such vehicles. A recent report also stated that Ford doubled its production target for the F-150 Lightning due to the strong demand. The automaker has planned to spend an extra $850 million to meet the target for the EV. The F-150 Lightning truck will be launched next year.

The reservation figures for F-150 Lightning, however, are still far behind those of Cybertruck which had already touch a million by the time the Ford EV had been unveiled.

Ford still maintains that it can not just play the EV game but lead it as well. US President Joe Biden too test drove F-150 Lightning and had appreciated its performance capabilities.

The electric truck features dual electric motors, one on each axle. This gives the EV 563 hp and a massive torque of 1,050 Nm. The electric F-150 is capable of touching speeds of 100 kmph in just four seconds. The EV also comes with a 12-inch digital instrument cluster and a 12-inch infotainment display. Ford has also claimed that with help of a superfast DC charger, the electric pickup truck can be charged to cover a distance of 87 km in 10 minutes. Ford has not neglected its towing capacity, giving the electric truck the capacity of 4,535 kgs.