Ferrari used a new control electronics in Carlos Sainz's car power unit during practice on Friday at Le Castellet which led to the penalty of 10 places on starting grid.
By : HT Auto Desk
| Updated on: 23 Jul 2022, 15:20 PM 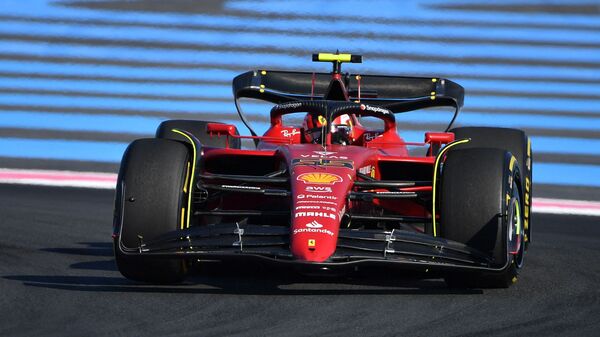 Ferrari driver Carlos Sainz seen in his car during the second free practice session ahead of the French Formula One Grand Prix at the Circuit Paul Ricard in Le Castellet, France.

Ferrari suffered a setback as it aims for their third straight win at this year's Formula 1 championship when its driver Carlos Sainz was penalised 10 spots at the starting grid on Sunday. On Friday, Carlos Sainz drove a car with new control electronics after his car's engines went up in flames at the Austrian Grand Prix last weekend. The change in the car dynamics caused F1 authorities to slap a 10-spot penalty to the Spanish driver ahead of the French Grand Prix at the Circuit Paul Ricard in Le Castellet, France.

Carlos Sainz, who won the British Grand Prix earlier this month, is among the top five drivers in the race for the championship title. He is placed behind Red Bull's Max Verstappen, Carlos Perez and his Ferrari teammate Charles Leclerc in the points tally on the driver board. Sainz has collected 75 championship points so far.

French Grand Prix offers Ferrari an opportunity to score a hat-trick of wins this season. After Sainz won the British Grand Prix on July 3, his teammate Leclerc won the Austrian Grand Prix last weekend. Ferrari made a strong start to their campaign in France during the practice sessions. The Italian F1 team emerged fastest in both practice sessions on Friday with Leclerc leading in the first session and Sainz in the second one. Leclerc clocked the best time of one minute 33.930 seconds on soft tyres while Sainz clocked a 1:32.527.

Red Bull, which leads the constructor's race to the championship title for the first time, is wary of Ferrari's power. "They've had a quick car all year and we can see they are competitive again this weekend," said Christian Horner, who leads the Red Bull team. “I think we're competitive in sector one, very competitive in sector two, sector three is probably the bit we've got to tidy up a bit overnight. Lots to look at," Horner added.

Max Verstappen, who is currently leading the championship race among the drivers, came second behind Ferrari's Sainz at the practice session finishing 0.091 slower. "We'll have a look at it all for tomorrow and of course try be closer than we were today," Verstappen added. The Dutch driver is 38 points clear of Ferrari's Leclerc after 11 of 22 races for the driver's championship title for a second consecutive year.