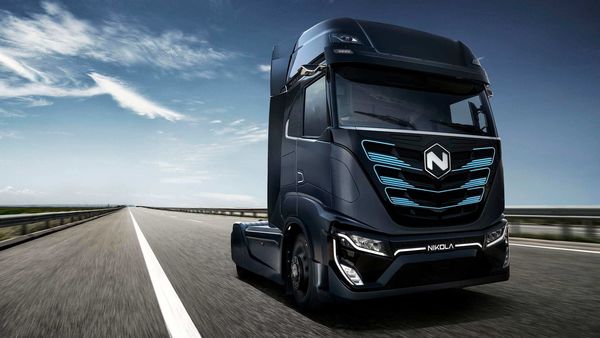 Nikola Corp.’s first earnings report was a bumpy one, with executives and analysts trading barbs and investors sending the electric-truck maker’s shares plunging.

The stock fell 18% in late trading after the company, which develops big rigs that run on batteries and fuel cells, said it lost $86.64 million in the second quarter, a five-times greater net loss than a year ago.

Within minutes of Nikola releasing its statement, its founder Trevor Milton was tweeting that the Phoenix-based company had provided analysts figures on the company’s share count. He wrote that taking those figures into account, the manufacturer beat expectations, contrary to some who said it fell short.

Analysts responded in kind by pressing Chief Executive Officer Mark Russell on Nikola’s earnings call for more information on new customers, production timing and any confirmation of a partnership with a manufacturer that will build the company’s electric pickup model, called the Badger.

“So, Mark, I just wonder, is this all we get?" Paul Coster, an analyst at JPMorgan who rates Nikola the equivalent of a buy, said to Russell. Jeff Osborne of Cowen said trying to follow timelines Milton has been communicating on social media has been “a bit confusing."

Nikola hopes to begin testing the battery-electric version of its first semi truck, the Tre, with select customers in 2021. The company has a joint venture with CNH Industrial NV’s Iveco truck unit to start limited production of the vehicle in Ulm, Germany, at the end of next year. Trucks powered by hydrogen fuel cells will be built in Coolidge, Arizona, starting in 2023, where the company broke ground on its first US manufacturing plant last week.

(Also read: Nikola sells $5,000 reservations for a truck with no prototype)

Russell declined during the call to name any new customers beyond Anheuser-Busch InBev SA, which has previously announced ordering 800 fuel-cell semis. In a phone interview, Russell said the company has potential buyers around the world.

“We had a fleet week in Europe where we bring the customers in, and we have had representatives of a good chunk of the market in our headquarters," Russell said. “A good chunk of the target customers have been to see us. We’ve been in conversation with them for some time."

(Also read: After Nikola's surge, Tesla to go 'all out' for mass production of Semi trucks)

After ending the quarter with $707.3 million in cash and equivalents, Milton said in an interview that Nikola’s focus will be on financial prudence as it brings products to market. The company expects to raise another $264.5 million by redeeming stock warrants.

“We run a really tight ship here and we do spend money, but only when it’s needed," Milton said. “That’s why we’re going to succeed and others have failed. They spent money like it’s just handed out."