European car sales jumped in October, although not enough to reverse a slump since the start of the year as demand weakens in key markets.
By : Bloomberg
| Updated on: 19 Nov 2019, 07:36 PM 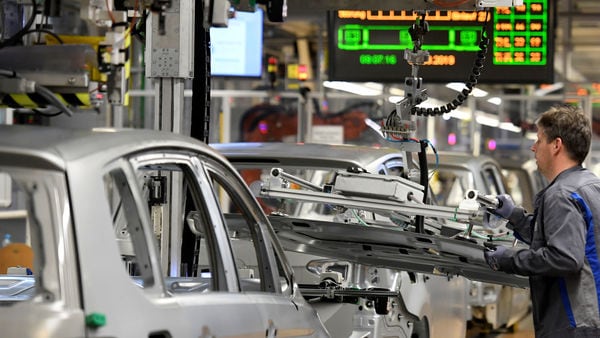 FILE PHOTO: An employee moves car components in a production line at the Volkswagen plant in Wolfsburg, Germany

(Bloomberg) -- European car sales jumped in October, although not enough to reverse a slump since the start of the year as demand weakens in key markets.

Registrations rose 8.6% to 1.21 million vehicles, the European Automobile Manufacturers Association said on Tuesday. The increase was due to a low comparison with a year earlier when sales suffered from new emissions tests.

The latest monthly figure takes registrations down 0.7% to 13.3 million vehicles since the start of the year, according to the group, putting 2019 on a path for a full-year decline.

European passenger car sales in October rose to their highest level since 2009, driven by demand in Germany and France and a rebound in demand for Volkswagen https://t.co/AUXMYWaMZ7 pic.twitter.com/2KxoOFc1rp

Carmakers from Volkswagen AG to Daimler AG as well as parts suppliers like Continental AG have lowered their expectations in recent weeks on weakening demand in some regions and the threat of trade war tariffs. A shrinking of the Chinese market has also deepened the gloom, with October car sales marking the 16th decline in the past 17 months.

The U.K. was the only major European market to have registered a sales contraction in October as uncertainty stemming from Brexit continues to roil the market.

Modest growth in October in Europe might continue in the final two months of the year, but the market is still unlikely to fare better than 2018, according to LMC Automotive. The forecaster said no progress is expected next year due to economic headwinds.

To contact the editors responsible for this story: Anthony Palazzo at apalazzo@bloomberg.net, Tara Patel, Frank Connelly