Home Auto News Dump The Diesel: This Biogas Fuelled Bus Can Reduce Emissions By Up To 90%

Dump the diesel: This biogas fuelled bus can reduce emissions by up to 90% 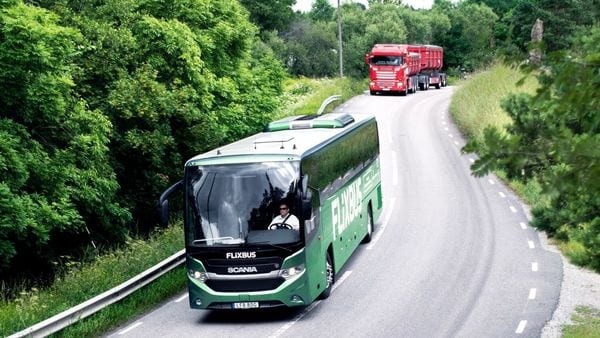 Commercial vehicles are blamed for high amounts of carbon emissions. But this liquid biogas powered long-distance bus is claimed to be capable of reducing carbon emissions by up to 90% compared to its fossil fuel-powered counterparts.

Currently, biogas is used in compressed form majorly for intracity buses, cars or light commercial vehicles. Long-distance vehicles have been shying away from this greener fuel solution. However, with the new bus, Scania hopes to create new dynamics in the green fuel domain.

The auto manufacturer claims that the availability of biogas across Europe will improve quickly, especially as European Union has decided to make fuelling points available along with the major European road networks. Currently, 17% of Europe's gas grid has biogas and the percentage is increasing. Sweden itself has a whopping 95% share of biogas in its vehicle gas grid.

Biogas comes with a lot of benefits compared to fossil fuels. It is fossil-free, renewable, locally produced and lowers emissions. This way it is efficient and reduces air pollution.

Talking about the biogas powered bus service, Johan Ekberg, head of Scania´s customer unit, said that this is the most sustainable coach solution.

Jonas Strömberg, sustainability director at Scania, said that biogas is not only the fuel with the lowest CO2 emissions, but it also solves local waste problems, creates local jobs and brings carbon and nutrients back to the soil.

"It is the Swiss Army Knife of circular economy. Biogas will be one of the key tools for decarbonisation of heavy-duty transport, especially for long-distance operations like intercity and long-haulage. Half of Europe’s heavy-duty gas fleet could be powered by biogas in 2025," Jonas Strömberg added.