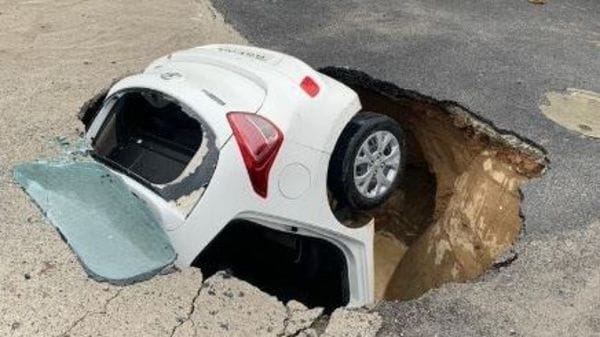 This car in Delhi's Dwarka area fell in as a road caved in in Sector 18 after persistent showers.

Delhi woke up to a drenched Monday morning as heavy and persistent showers across the national capital region may have brought down temperature but also created absolute chaos in many areas. While traffic snarls were reported from several key junctions, a car in Dwarka's Sector 18 fell into a crater created after a road caved in.

The meteorological department had already issued an Orange Alert and predicted heavy to very heavy showers in Delhi and adjoining areas. Overnight showers from Sunday continued for most of Monday, causing many key roads to be submerged. Traffic, quite obviously, came to a crawl. Slow-movement of traffic was reported in areas such as Tikri Road, under Narela-Bawana flyover, parts of Dhaula Kuan, Chattarpur, RK Puram, among others.

(In pics: From Mumbai to Munich and beyond, flooding slams brake on daily life)

While water-logging was a major problem, there were also reports of trees falling on main roads which further created problems for motorists. There were also instances of vehicles suffering malfunction and being parked on the side which resulted in bottlenecks.

In a horrific incident though, a car fell into a crater when a section of road in Dwarka's Sector 18 caved in. News agency ANI reported that the vehicle was eventually rescued with the help of a crane and that there was no report on any injury.

It was a field day for personnel of Delhi Traffic Police as staff was deployed at key areas to ensure smooth traffic flow. But with more rain predicted through until Tuesday, the woes of motorists in the country's capital is likely to persist.