Transport Minister Nitin Gadkari shared the data today saying Tamil Nadu has made the most significant progress in this regard.
By : PTI
| Updated on: 16 Mar 2020, 18:55 PM 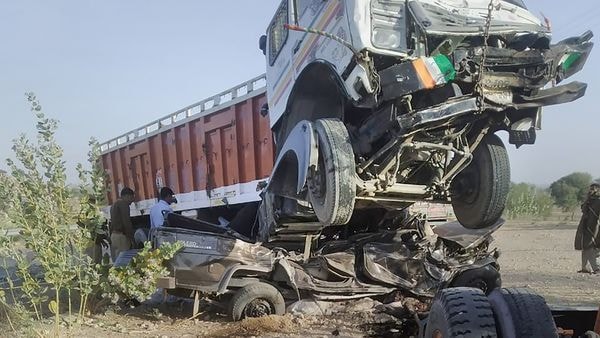 Mangled remains of a car after it collided with a truck in Jodhpur district on March 14, 2020. At least 11 people were killed and three injured in the accident on the Balotra-Phalodi highway.

There has been a 10 per cent reduction in the number of deaths caused due to accidents in the country since the passage of the amended Motor Vehicles Act five months ago, Transport Minister Nitin Gadkari informed Rajya Sabha on Monday.

The minister, while replying to supplementaries during the Question Hour, said the government has pledged to reduce 50 per cent accidents in the next five years, and India is a signatory to this at the World Safety Conference held in Sweden recently.

Gadkari said a total of 5 lakh accidents happen in the country and around 1.5 lakh people lose their lives in these accidents. Of these, 65 per cent people die in the age group of 18 to 35 years, he said.

He said Tamil Nadu has made significant progress in reducing the number of deaths in road accidents in the country by 24 per cent in the last five months, the maximum anywhere in the country.

"There has been a 10 per cent reduction in the number of deaths due to accidents in the country in the last five months ever since the passage of the new Motor Vehicles Act by Parliament," Gadkari informed the House.

"We have been able to save 10,000 lives," he said, adding that Tamil Nadu has done some good work in this regard.

Gadkari said Jammu and Kashmir and Chandigarh have shown 15 per cent reduction in the number of deaths due to accidents, Gujarat has helped reduce 14 per cent deaths, Uttar Pradesh 13 per cent and Andhra Pradesh 7 per cent, while Manipur reduced 4 per cent.

"However, in Kerala there has been a rise of 4.9 per cent in deaths due to road accidents and Assam has shown 8 per cent rise," he told the House.

The minister also informed that among various steps being taken to reduce accidents, the government proposes to open 1,000 driving schools in the country, of which 22 have already been opened.

He said most accidents happened due to poor road engineering and the government has identified 3,000 black spots to help reduce accidents in the country.

He said a ₹14,000 crore plan has been put in place whereby the World Bank and Asian Development Bank will invest ₹7,000 crore and the same amount will be spent by the Government of India towards education, enforcement and improving road engineering to help reduce accidents.

The transport minister also informed that the Motor Vehicles Act is in the Concurrent list and states are empowered to compound the offences and implement the provisions of the Act as per their requirements.

He said both his and a chief minister's vehicle have been challaned for traffic violations and no one is spared whatever the position one may occupy.

He also told the members that there is no discrimination on the basis of sex, caste or class of people and anyone violating the law will be punished and challaned.