Several cars and two-wheelers in Mumbai were damaged by collapsed trees as high-speed winds rushed across.Several trucks and tankers were stranded in Gujarat due to blockage of roads.
By : HT Auto Desk
| Updated on: 18 May 2021, 11:17 AM 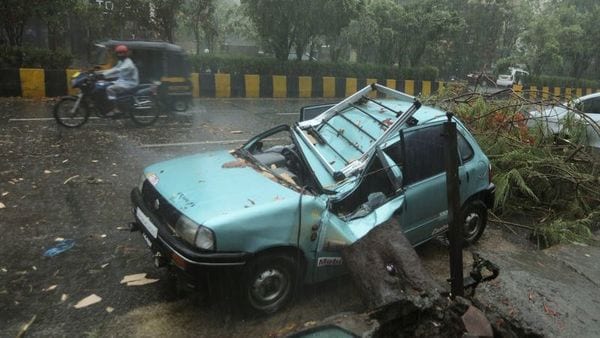 A damaged car is seen on a road after a tree fell on it due to strong winds caused by Cyclone Tauktae in Mumbai.

Cyclone Tauktae made landfall in Gujarat on Monday night and even though the Met department has said now that it is weakening, it did leave a trail of massive destruction in its wake. While electricity poles and trees were uprooted in many parts of the western states of Maharashtra, Goa and Gujarat, many vehicles in the open were heavily damaged because of factors caused by Cyclone Tauktae.

(Destruction in pics: How the cyclone battered Mumbai)

With wind speeds in triple digits and heavy showers, Cyclone Tauktae caused a lot of destruction in many cities close to the coast in Maharashtra. In Mumbai, many cars and scooters out in the open and parked next to sidewalks were battered after trees fell on them. Similar incidents were also reported from the suburbs. A car damaged under a collapsed tree during Cyclone Tauktae in Vashi. (HT PHOTO)

While Covid-19-related restrictions are in effect, those who had to venture out had a harrowing time managing the submerged roads in several cities of the affected states and in the union territory of Diu. In many cities, rain water reached almost till the grille and local officials had to be called in to rescue stalled vehicles.

Gujarat though is where Cyclone Tauktae made its most dreaded impact with 175 mm rainfall recorded in just 12 hours till 4 am on Tuesday in Gir Somnath. News agency PTI reported at least four deaths caused by the cyclone while local media outlets in the state also reported mounting destruction to public as well as private property. 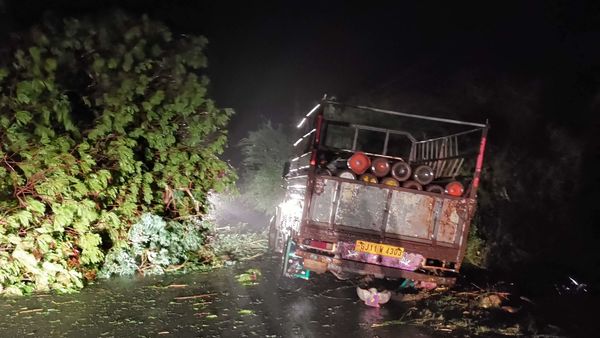 A truck loaded with oxygen cylinders stuck as trees fell due to impact of approaching Cyclone Tauktae, near Mahua, some 300 kms from Ahmedabad. (AFP)

The high speed of winds uprooted several trees, electric poles and mobile towers that led to several roads being blocked. This resulted in battering of essential services and supply of medical equipment in the state amid coronavirus pandemic. An AFP image shows a truck loaded with oxygen cylinders stuck near Mahua, some 300 kms from Ahmedabad, due to falling of trees.

Army personnel rushed to clear the blocked roads in the affected areas. The state's authorities also blocked all major highways leading up to Somnath and Diu in order to prevent any major accident, which led to a long queue of trucks and tankers.