The automaker is trying to save cash in order to avoid layoffs amid an uncertain economic outlook. GM said its salaried workers will be paid an additional 6% interest on top of the delayed compensation owed to them.
By : Bloomberg
| Updated on: 27 Mar 2020, 11:46 AM 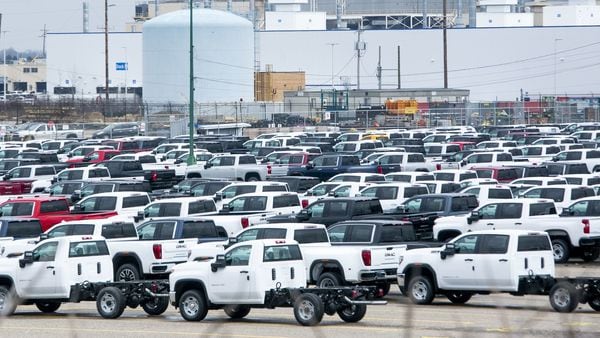 New vehicles sit in a lot in front of the idled General Motors Co. Flint Assembly plant in Flint, Michigan, US.

General Motors Co. is freezing work on new-vehicle programs and deferring pay for white-collar staff to conserve cash while many of the carmaker’s plants are shut down as a result of the coronavirus pandemic.

In an internal memo described to Bloomberg News, the automaker said salaried staff will have 20% of pay deferred starting April 1 through the fourth quarter of this year or first quarter of 2021. The company’s senior management team will take pay cuts of as much as 10% and defer 20% of their cash compensation. GM also will put 6,500 employees, many of them engineers who work at plants, on leave with 75% of their pay until production resumes.

The austerity measures are expected to save a significant amount of cash for the carmaker, which has moved to shore up its balance sheet since temporarily closing its North American factories last week. GM tapped $16 billion from its credit facilities to roughly double its cash on hand earlier this week.

“GM’s business and its balance sheet was very strong before the Covid-19 outbreak and the steps we are taking now will help ensure that we can regain our momentum as quickly as possible after this crisis is over," Jim Cain, a GM spokesman, said in an email.

While some vehicles under development will be delayed, models close to launch such as the lucrative Chevrolet Tahoe, GMC Yukon and Cadillac Escalade large SUVs will go on sale later this year as scheduled. The company will also spare its Cadillac electric SUV and Cruise Origin self-driving vehicle programs from delays, the spokesman said.

The automaker is trying to save cash in order to avoid layoffs amid an uncertain economic outlook. GM said its salaried workers will be paid an additional 6% interest on top of the delayed compensation owed to them.

Car manufacturers are doing everything they can to preserve capital to help offset lost revenue from shuttered factories and deserted showrooms. Credit ratings companies have been scrutinizing the industry in recent days, with GM being put on a negative watch on Wednesday by Standard & Poor’s and Moody’s Investors Service.

With the costs of borrowing potentially rising and demand for new vehicles possibly slowing further, it’s wise to cut costs, said Morningstar Inc. analyst David Whiston. “They have to plan in case things get worse," Whiston said by phone. “If things get really bad, it’s about survival and survival means cash."