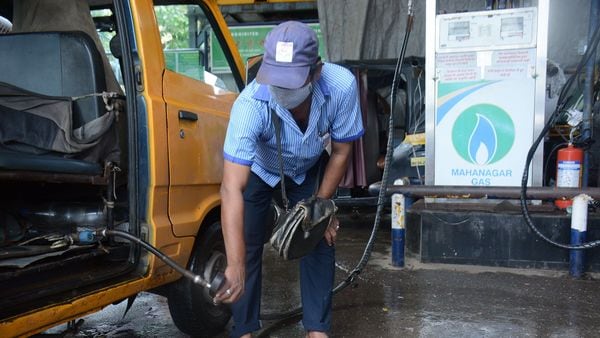 A CNG pump station attendant filling CNG gas in a car amid CNG price rise by 2.58 paise per kg.

While the government is aiming at enhanced usage of greener fuel, one of the widely used greener and alternative fuels, CNG has become costlier in Mumbai. Compressed Natural Gas or CNG in the business capital of India now costs ₹61.5 per kg after being increased by ₹3.96 per kg.

Effective from Saturday, this latest price hike comes as the third hike in two months. Also, this year, the price of CNG has been increased 14 times in the last ten months by Mahanagar Gas Limited or MGL.

Considering the low cost of procurement, many autorickshaws, taxis, large commercial vehicles and passenger vehicles too shifted to CNG as prices of petrol and diesel had shot past ₹100 per litre mark in the city. Now the series of hikes in CNG prices are bound to affect these vehicle owners and will result in higher transportation costs.

Meanwhile, petrol and diesel costs remain static for 25 days straight. Since the central government reduced excise duty on both petrol and diesel, prices of these two motor fuels have remained steady.