Most EVs are sold in the U.S., China and Europe, where state-backed purchasing incentives and investments in charging infrastructure make it easier for customers to abandon combustion cars.
By : Bloomberg
| Updated on: 31 Jul 2021, 11:56 AM 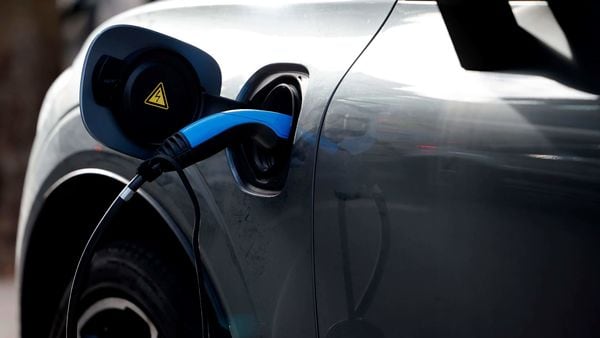 A charging cable is pictured plugged into a Volvo electric vehicle (EV), parked in a parking bay reserved for electric vehicles, in London on November 18, 2020. (Photo by Tolga Akmen / AFP)

Europe’s plan to phase out combustion-engine vehicles has put the region at the forefront of climate protection. Yet without progress cleaning up poorer nations’ roads, it won’t be enough to keep global warming below dangerous levels.

Take Nairobi, for example. The Kenyan capital’s vehicle fleet doubles every eight years and its roughly 4.5 million inhabitants rely on minibus taxis called Matatus to get around. While they’re cheap, they tend to be older and often run on dirty diesel.

While virtually all of the world’s population growth by 2050 is forecast to take place in developing countries, thousands of cities in Africa, Asia and Latin America may stick to fossil fuel-powered vans, buses and motorcycles for decades, said Rob de Jong, who heads the mobility unit at the United Nations’ environment program. In Kenya, carbon dioxide emissions have roughly doubled since 2005, with the transport sector responsible for much of the increase.

“If we only bring electric vehicles to the U.S. and Finland and the Netherlands, we will not meet the Paris climate agreement targets," DE Jon said in a phone interview. “We need low- and no-emission vehicles also to be introduced in low- and middle-income countries."

Most EVs are sold in the U.S., China and Europe, where state-backed purchasing incentives and investments in charging infrastructure make it easier for customers to abandon combustion cars. Yet in many developing nations, a lack of government spending power and patchy infrastructure present major obstacles to making the switch.

The European Union this month proposed that member states stop selling cars with any emissions no later than 2035 -- a move expected to speed up EV adoption and help the region reduce transport emissions that have climbed by a third since 1990.

Richer nations are responsible for most of man-made warming, with three-quarters of industrial emissions originating in North America, Europe and China, according to University of Oxford research. Africa accounts for just 3% of the total, but its share is expected to climb rapidly due to population growth.

When the Paris climate accord was adopted in 2015, countries pledged to keep global warming below 2 degrees Celsius (3.6 degrees Fahrenheit). Researchers now believe a 1.5-degree cap is required to avoid some of the most catastrophic consequences of climate change, putting pressure on the West to also assist poorer nations in their quest to rein in emissions.

Countries including Uganda and Morocco have already introduced rules to raise the quality of the hundreds of thousands of used cars imported from the West every year. Most of these vehicles are between 16 and 20 years old, meaning the industry has contributed to worsening air pollution in the region.

Part of the problem is that global automakers design their cars, vans and motorcycles to win over well-heeled customers in the West, largely ignoring the needs of potential buyers in poorer markets, de Jong said.

Local EV startups are cropping up across Africa to capitalize on the potential. Demand for battery-powered vehicles is already vastly outstripping supply in nations like Rwanda, where motorbike maker Ampersand is expanding its bike and battery-swap station network.

China’s BYD Co. is selling its electric vans in Kenya via a local distributor that aims to import as many as 100 units by the end of the year. The Kenyan government’s electricity producer has spent hundreds of millions of dollars drawing geothermal energy from the volcanic Rift Valley -- power for the grid that startup ARC Ride plans to use to charge its fleet of electric rickshaws and motorbikes.

Yet without additional institutional backing and the resources wielded by major automakers, scaling up local manufacturing and electrifying auto fleets may remain elusive.

Volkswagen AG, the world’s second-largest automaker, plans to accelerate the rollout of EVs in Europe in a push that could see its namesake brand fading out combustion engines in the region between 2033 and 2035. But the industrial giant also is exploring bioethanol in Brazil and has suggested that in some parts of the world, fossil fuels may stay around longer.

ARC Ride is trying to speed up the shift. The company aims to offer cleaner transportation in several African cities and is currently focusing on Nairobi, where its motorbike fleet has helped deliver for Uber Eats. The startup plans to roll out the vehicles as taxis in Rwanda from next year.

“These cities are rapidly growing, and it would be catastrophic for the climate if that growth is carbon-heavy," Chief Executive Officer Joseph Hurst-Croft said. “We really can and urgently need to leapfrog whole energy systems to create transport that’s cleaner end-to-end."