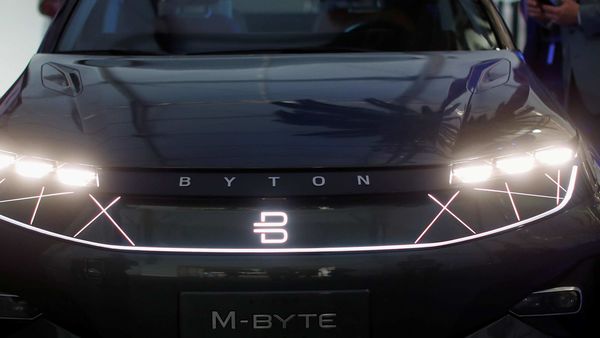 Chinese electric vehicle (EV) maker Byton, backed by Apple assembler Foxconn, is in talks to go public through a merger with a special-purpose acquisition company (SPAC), people familiar with the matter told Reuters.

Byton, whose key shareholders also include China's state-owned automaker FAW Group and EV battery maker CATL, is in talks with potential SPAC companies and investors about the listing and plans to go public as early as this year, two sources, who declined to be named as the talks were private, said.

Byton was launched in 2017 by Future Mobility Corp, a company co-founded by former BMW and Nissan Motor executives. But it has been facing cash flow problems since 2019 as investors were cautious ploughing money in a crowded sector when EV sales growth was slowing in the world's biggest car market.

The embattled company was building a car factory in the eastern city of Nanjing but suspended the endeavour in July to conduct a reorganisation of the firm.

Last month Byton sealed a deal to start making electric sport-utility vehicles with Foxconn and the Nanjing Economic and Technological Development Zone in 2022.

As part of the agreement, Foxconn will invest $200 million into the SUV research and production project and will help build supply chain for the EV production that aims to lower car manufacturing costs, one of the sources said.

"The company is currently focusing on the optimisation of the supply chain manufacturing of Byton's new energy vehicles, and will not comment on other market rumours," Foxconn, formally Hon Hai Precision Industry Co Ltd, said in a statement.

SPACs have emerged as a quick route to the stock market for companies, particularly auto technology firms, and have proven popular with investors seeking similar benefits to that of Tesla Inc's high stock valuation.

EV industry companies Microvast, Faraday Future and EVgo Services are some of the firms in the industry that have agreed to merge with SPACs so far this year.