Farmers on Saturday parked their tractor-trailers in middle of roads and raised slogans against the Centre during a three-hour-long chakka jam agitation in Punjab and Haryana.Several highways were blocked by the protesting farmers.
By : PTI
| Updated on: 07 Feb 2021, 08:14 PM 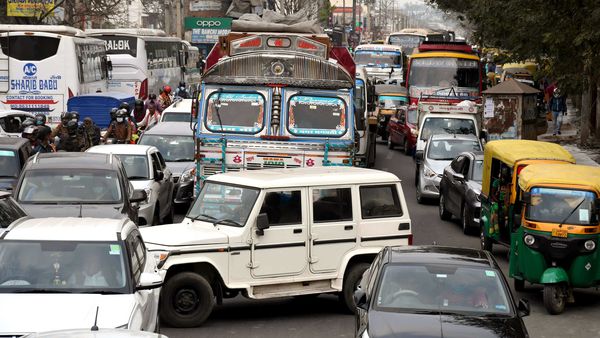 The call for the nationwide chakka jam was given by the farmer unions protesting the Centre's farm laws at the Delhi borders. (Representational Photo)

Farmers on Saturday parked their tractor-trailers in middle of roads and raised slogans against the Centre during a three-hour-long "chakka jam" agitation in Punjab and Haryana.

Women took part in the stir in sizeable number at several places.

The call for the nationwide "chakka jam" was given by the farmer unions protesting the Centre's farm laws at the Delhi borders.

The three-hour-long agitation was announced to register protest against the internet ban in areas near their agitation sites, alleged harassment meted out to farmers by the authorities and other issues.

(Also Read: Traffic diverted in many parts of Delhi due to farmers' protest)

Farmer leaders claimed that their three-hour stir remained peaceful in both states.

Police had stepped up security and had made all arrangements for traffic diversion, said officials, adding adequate security personnel were deployed in Punjab and Haryana.

Protests were also held at Shambhu near Ambala and at many toll plazas in both states.

Protesting farmers said ambulances and school buses were allowed during the ''chakka jam''.

Farmers carried placards with slogans “Jai Jawan, Jai Kisan' and “Kisan Ekta Zindabad". They also raised slogans against the Centre for not acceding to their demand of repealing the farm legislations.

In the morning, farmers started assembling at their earmarked protest sites in both states.

They parked tractor-trailers and other vehicles on roads. Women took part in the agitation in sizeable number at several places, including in Punjab's Sangrur and Ludhiana.

"The government should repeal the three laws as they are not in the interest of the farming community," said a protester at the Shambhu border.

Thousands of farmers have been protesting since late November at the Delhi borders with Haryana and Uttar Pradesh, demanding a rollback of the Farmers' Produce Trade and Commerce (Promotion and Facilitation) Act, 2020; Farmers’ (Empowerment and Protection) Agreement on Price Assurance and Farm Services Act, 2020; and Essential Commodities (Amendment) Act, 2020.

The protesting farmers have expressed apprehension that these laws would pave the way for the dismantling of the minimum support price (MSP) system, leaving them at the "mercy" of big corporations.

However, the government has maintained that the new laws will bring better opportunities to farmers and introduce new technologies in agriculture.