Several major carmakers including Volkswagen and Daimler have announced thousands of job cuts for the coming years.
By : AFP
| Updated on: 16 Dec 2019, 08:00 PM 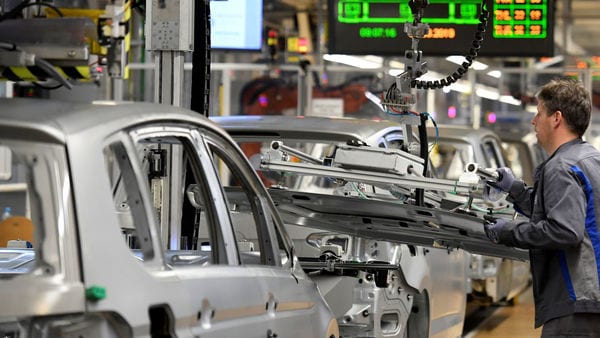 FILE PHOTO: An employee moves car components in a production line at the Volkswagen plant in Wolfsburg, Germany

The number of people working in German manufacturing firms fell for the first time in nine years in December, official data showed Monday, with car industry jobs among the worst hit.

That was the first ebb since December 2010.

At 1.1 percent, the contraction was much sharper in the car industry, Germany's second-largest employer after machine tool making.

Several major carmakers including Volkswagen and Daimler have announced thousands of job cuts for the coming years.

The industry has for years battled to escape the after-effects of the "dieselgate" emissions cheating scandal that broke over VW in 2015 and has since spread to other manufacturers.

Meanwhile a forecast for the number of cars set to roll off German production lines this year showed the figure at a 22-year low of 4.67 million.

Around the world, car markets have been battered by the effects of the American trade conflict with China.

"In a simple image, Donald Trump is putting workers in the German car industry on shorter hours," Dudenhoeffer said.

But structural reasons are also behind falling output in Germany.

Where in 1998 close to 12 percent of all cars sold worldwide were produced in Europe's powerhouse, the share has shrunk to below six percent this year, Dudenhoeffer said.

Germany's share of production has contracted as the country's powerful car manufacturers have grown their operations abroad, he added.

That makes Germany more dependent than ever on good trading relations, especially with China, Dudenhoeffer said.

The expert also forecast that German car production would begin growing again in 2021 after bottoming out next year.