Currently, Cruise's commercial robotaxi service is operating in San Francisco between 10 pm and 6 am on designated streets and without a human safety operator.
By : HT Auto Desk
| Updated on: 05 Jul 2022, 08:52 AM 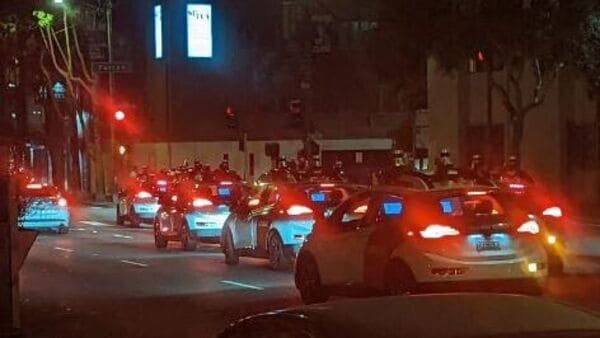 Image showing a bunch of Cruise robotaxis gathered together

General Motors-backed Cruise has been testing its self-driving technology in San Francisco for a few years now, and it launched its commercial robotaxi service in the city, where there no human safety driver is deployed. In juts a few days of launching the service, a widely circulated Reddit image shows that a bunch of Cruise robotaxis were seen randomly gathered on the intersection of Gough and Fulton Streets in the city at approximately midnight. They happened to block off the street and the oncoming traffic for a couple of hours.

The situation came under control only after employees from Cruise arrived at the site and manually moved each of the autonomous vehicle. The vehicles were recovered by using a combination of remote assistance and manual retrieval. The whole manual process took more than 20 minutes. A Cruise spokesperson informed Tech Crunch that this happened due to a technical issue that caused some of the robotaxis to cluster together.

(Also read | Ferrari promises to not build an autonomous car)

Apologizing for the inconvenience caused to people, the spokesperson said that the issue has now been resolved and that no passengers were impacted during this. Currently, Cruise's commercial robotaxi service is operating in San Francisco between 10 pm and 6 am on designated streets and without a human safety operator. As many as 30 robotaxis are being rolled out by Cruise as part of its commercial service in San Francisco.

These vehicles have been limited to a maximum speed of 48 km/h and cannot go to down town or onto highways. They have also been prevented from driving during heavy fog, rain, or smoke.

The Cruise robotaxi cluster incident comes just a couple of weeks after a test Cruise vehicle blocked a fire truck that was responding to an emergency. However, Cruise maintains that its test vehicle behaved as designed and yielded to the fire truck after blocking it for 25 seconds.