Bugatti Centodieci was first introduced in 2019 and it is a rare hypercar from the automaker.Bugatti will manufacture only 10 units of the Centodieci model.
By : HT Auto Desk
| Updated on: 16 Oct 2021, 09:16 AM 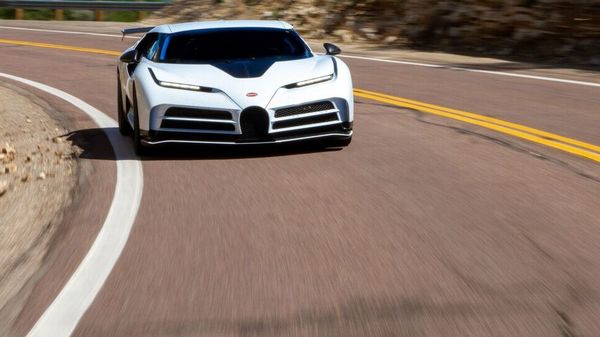 Bugatti Centodieci has successfully passed its hot-weather test for which it has been put to paces in the United States over recent times. Introduced in 2019, the hypercar was subjected to the harsh condition of the deserts in the US. The temperature in these areas can also exceed 50 degrees Celsius.

Bugatti Centodieci, accompanied by Bugatti Chiron Pur Sports and Chiron Super Sports, began its journey from California and drove through Arizona covering Central Pacific Highway San Diego. The cars covered a total distance of 800 km. Stefan Schmidt, an engineer in Overall Vehicle Development at Bugatti, shared that testing these supercars in the hot desert helped the team in the development process. “All Bugatti models have to function perfectly no matter how high the temperature, including the few-of Centodieci," he added. The luxury automaker has planned to manufacture only 10 units of the Bugatti Centodieci.

Bugatti informed that the engineers continuously exposed the Centodieci to a demanding test program. The hypercar was taken to rough roads and was also subjected to low-speed stop-start traffic. The team also left the car standing in the blazing sun with the air conditioning on full blast and also stretched it to a speed of 320 kmph in a closed road environment.

(Also read | Bugatti Chiron-based Centodieci is rare. But wooden Centodieci may be matchless)

The model was fitted with 200 sensors which sent the data to the engineers on-site and the development team back at Wolfsburg. The team repeatedly checked key systems such as the electrics, telemetrics, radio frequencies, air conditioning, and fueling processes after each level of the test. Pierre Rommelfanger, head of Overall Vehicle Development at Bugatti, stated that even though during hot-climate testing focus is primarily given to chassis, engine, transmission, thermal management and electrics, the team leaves no stone unturned to check interior components and body parts that may undergo changes due to thermal expansion.

Bugatti also informed that it will start the deliveries of Centodieci models next year.