BMW has been less committed to battery-only models compared to Tesla and Volkswagen, instead introducing an array of plug-in hybrids.However, BMW's iNext, based on a dedicated architecture for EVs, is expected to go on sale in Europe next year.
By :
| Updated on: 11 Nov 2020, 04:18 PM 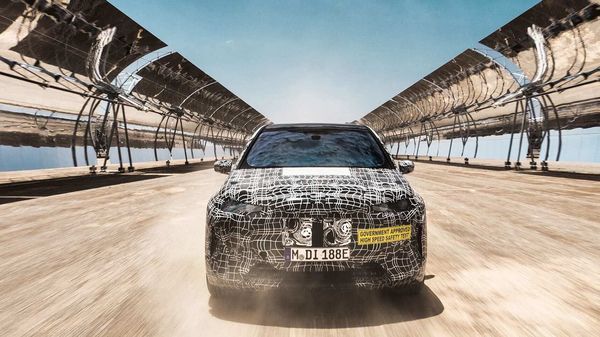 The battery-powered iNext SUV that BMW is showing the final design of Wednesday will go into production seven years after the company began making the i3 hatchback. At that time, Tesla Inc. was just getting the Model S off the ground, and Volkswagen AG was still marketing millions of illegal engines as “clean" diesels.

The tables have turned since then. Tesla has run away with electric-vehicle sales leadership, and VW has emerged from its emissions scandal with plans to give Elon Musk a run for his money. BMW has been less committed to battery-only models, instead introducing an array of plug-in hybrids.

Last week, Chief Executive Officer Oliver Zipse seemed at least tacitly to suggest some may have forgotten about the iNext, which the German carmaker first talked about four years ago. “I’m sure this car will surprise and delight a lot of people," he said during BMW’s quarterly earnings call.

The perception that BMW missed the boat with regard to EVs has been costly. Its shares are down more than 40% from their peak in 2015, valuing the company at about 45 billion euros ($53 billion). At $389 billion, Tesla’s market capitalization is more than seven times richer.

When Arndt Ellinghorst, an auto-equity analyst at Sanford C. Bernstein, initiated coverage of European carmakers in September, he was surprised how many investors thought BMW lacked an EV narrative like VW’s.

“Sometimes BMW seems to be ‘too smart to care’ when it comes to telling their story," Ellinghorst, who rates the company the equivalent of a buy, said in an email. “They’re great at engineering but poor at communicating it."

The iNext, which BMW showed a concept version of in 2018, is expected to go on sale in Europe next year for at least 75,000 euros, a price point that portends niche sales volume relative to the half a million vehicles Tesla expects to deliver worldwide this year. VW is similarly aiming for more of a mass market with its lower-priced ID.3 hatch and ID.4 crossover.

BMW’s iNext is based on a dedicated architecture for EVs that Ellinghorst expects the company to launch more models from in the future. While some investors see the carmaker’s electric efforts as half-hearted, he expects the new iX3 -- a battery-only version of the X3 sport utility vehicle -- to be competitive with Tesla’s Model Y in terms of range.

“The risk of being the latest to change its strategy was higher than the risk to lose something of the BMW DNA," he said.