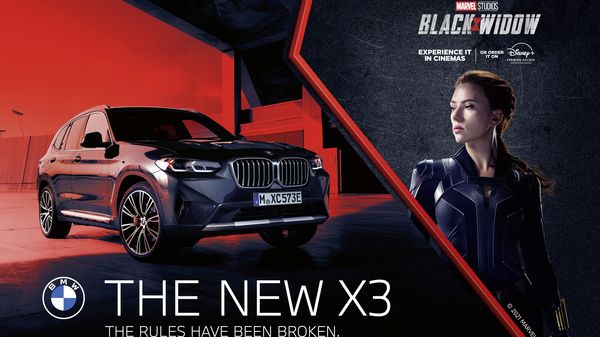 BMW will use two of its cars in the new Black Widow movie.

BMW and Marvel Studios have teamed up for the first time for the latter's upcoming movie, Black Widow. The movie will showcase both BMW X3 and BMW 2 Series Gran Coupé. The automaker says that this collaboration will continue beyond Black Widow.

The car used in the action sequence of the film is a black BMW X3 M40i. The company also adds that the Marvel fans residing in Munich, Germany will get an opportunity to see the original car used in these sequences at the BMW Welt. BMW has also released a behind-the-scenes video on its YouTube channel where one can see a chase sequence in which the X3 model comes under heavy fire, loses a door, crashes with parked cars, performs 360-degree powerslides, explodes, and finally does a backflip before it lands upside down on a tank. Since BMW 2 Series Gran Coupé doesn't appear in the video, one may have to wait for the movie that is slated for release on July 9. It will star Scarlett Johansson as the protagonist.

Senior vice president of partnership marketing at the Walt Disney Company Mindy Hamilton said that the cars add to the protagonist's journey in own their way. “The X3 and 2 Series Gran Coupé are sleek and agile, just like Black Widow, and we are so excited for the world to see where we’ve been together in July," she said. Senior vice president customer and brand BMW Jens Thiemer also praised the automaker's first-time collaboration with Marvel Studios.

The BMW X3 model boasts a 2.0-litre turbo engine with 248 hp and 349 Nm of torque. BMW's new 2 Series Coupé will be a combination of compact dimensions with a powerful in-line 6-cylinder engine and rear-wheel drive. The automaker says this series represents the most modern interpretation of the legendary BMW 2002.