Manoj Tiwari, the former chief of Delhi, rode motorcycle without a helmet, during Har Ghar Tiranga campaign in the national capital. He was fined on more counts than just riding without helmet.
By : HT Auto Desk
| Updated on: 05 Aug 2022, 10:33 AM 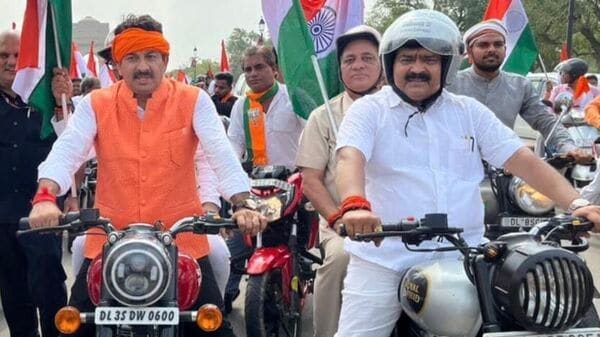 In a rare gesture from a politician, BJP MP Manoj Tiwari apologised to Delhi Traffic Police for breaking traffic rules. Tiwary, the former chief of the Delhi BJP unit, was seen earlier riding a motorcycle without a helmet. The MP from Delhi was participating in a campaign called Har Ghar Tiranga to mark the 75th Independence Day of India. He rode on a Royal Enfield motorcycles, along with others who had helmets on. Tiwari did say sorry for his actions, but not before Delhi Traffic Police slapped a ₹21,000 fine on the politician.

Tiwari took to social media to apologise for his actions. He wrote, “Very Sorry for not wearing helmet today. I will pay the challan @dtptraffic. Clear number plate of vehicle is shown in this photo and location was Red Fort."

The reason why Delhi Traffic Police issued a challan of ₹21,000 to Tiwari is not just flouting safety norms. The Royal Enfield Tiwari was riding did not have a high security registration plate (HSRP). The bike also did not have a valid pollution check certificate. All three traffic violations were added in Tiwari's challan.

Delhi Police spokesperson Suman Nalwa said, "We have challaned the driver for helmet, licence, pollution and High Security Number Plate (HSRP) violation, the challan amount is ₹21,000." Another challan of ₹20,000 was issued against the owner of the motorcycle for not having pollution certificate and security number plate.

New traffic fine rates in New Delhi have been effective since January last year. The fine for violating the stop line is ₹500 while driving without PUC is ₹2000. Moreover, the fine for jumping red light is fixed at ₹1000 and the fine for breaking speed limit stands at ₹2000.

One can pay traffic fines digitally now. One needs to visit the e-challan section on Parivahan portal and fill all required fields to get details of the challan. The challan can be found along with the option to pay the fine online.