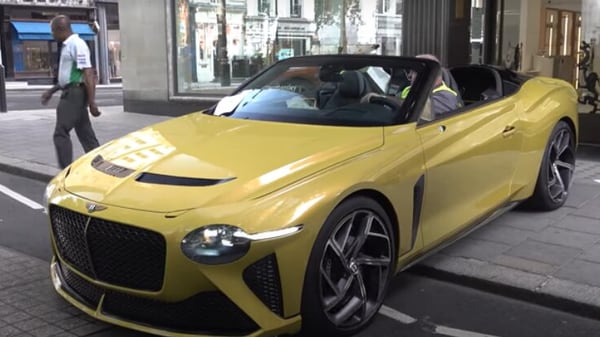 Screengrab of the Bentley Bacalar in the video posted by TheTFJJ.

It is not every day that one comes across a bespoke convertible Bentley and when one does, it demands absolute attention. All eyes were on this new Bentley Bacalar as it steadily moved on the London roads fresh out of the showroom. It was reported earlier that the British luxury automaker will make only 12 units of this. Recently recorded by TheTFJJ and posted on YouTube, this stunning convertible sported the original golden launch colour. Reports said that the Bacalar in the video has been hardly driven and was probably on its way to its owner.

(Also read | Bentley Bacalar, with expected price of 1.5 mn pounds, sold out in a day)

These exclusive two-door Bentley models have been designed, engineered and handcrafted by the experts of the oldest coachbuilding company in the world, Bentley Mulliner. These two-seater cars have been tailor-made according to the taste of the owners and each cost around 1.5 million pounds (around 14 crores). The automaker claims that the Bentley Bacalar is the epitome of luxury which comes with seamless performance.

Screengrab of the new Bentley Bacalar from video posted by TheTFJJ.

A Bacalar has a 6.0-litre, W12 TSI engine capable of producing power of 650 bhp and 900 Nm of torque. It has a 12-cylinder engine which is the most advanced in the world. It also constitutes an advanced eight-speed automatic gearbox, double-clutch and all-wheel drive with different torque distribution between both axles, however, under normal driving conditions the force is sent to the rear axle. It can zip to a speed of 100 kmph in three and a half seconds and has a top speed of 322 kmph.

The interiors of these cars are also exclusive but sustainable material such as natural wool, wood from naturally fallen trees and rice husk, among others, have been used. The seats and the dashboard has been lined with Nappa leather.