The auto industry is among the first major sectors of the economy to restart its engine.However, the auto sector won't see a full return to normal yet, and if people don't start buying vehicles again, the workers could be sent home.
By : PTI
| Updated on: 15 May 2020, 12:42 PM 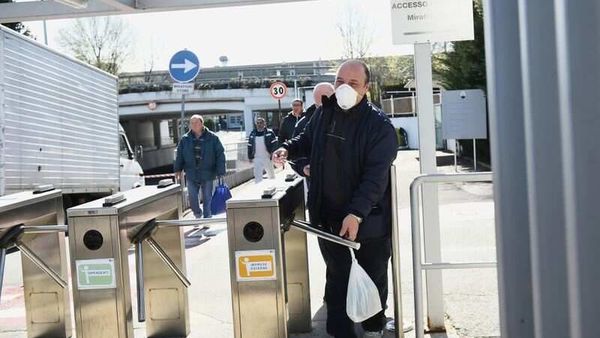 Defying a wave of layoffs that has sent the U.S. job market into its worst catastrophe on record, at least one major industry is making a comeback: Tens of thousands of auto workers are returning to factories that have been shuttered since mid-March due to fears of spreading the coronavirus.

Until now, it was mostly hair salons, restaurants, tattoo parlors and other small businesses reopening in some parts of the country. But the auto industry is among the first major sectors of the economy to restart its engine.

With it comes about 133,000 U.S. workers pouring back into assembly plants that will open in the coming week, or just over half of the industry's workforce before the pandemic, according to estimates by The Associated Press.

Looming in the background is an economy decimated by the pandemic. Nearly 3 million laid-off workers applied for unemployment benefits last week, raising the total seeking aid to about 36 million.

Although some states have begun to let selected businesses reopen, workers are still reporting difficulty getting unemployment benefits. Freelance, gig and self-employed workers are struggling. 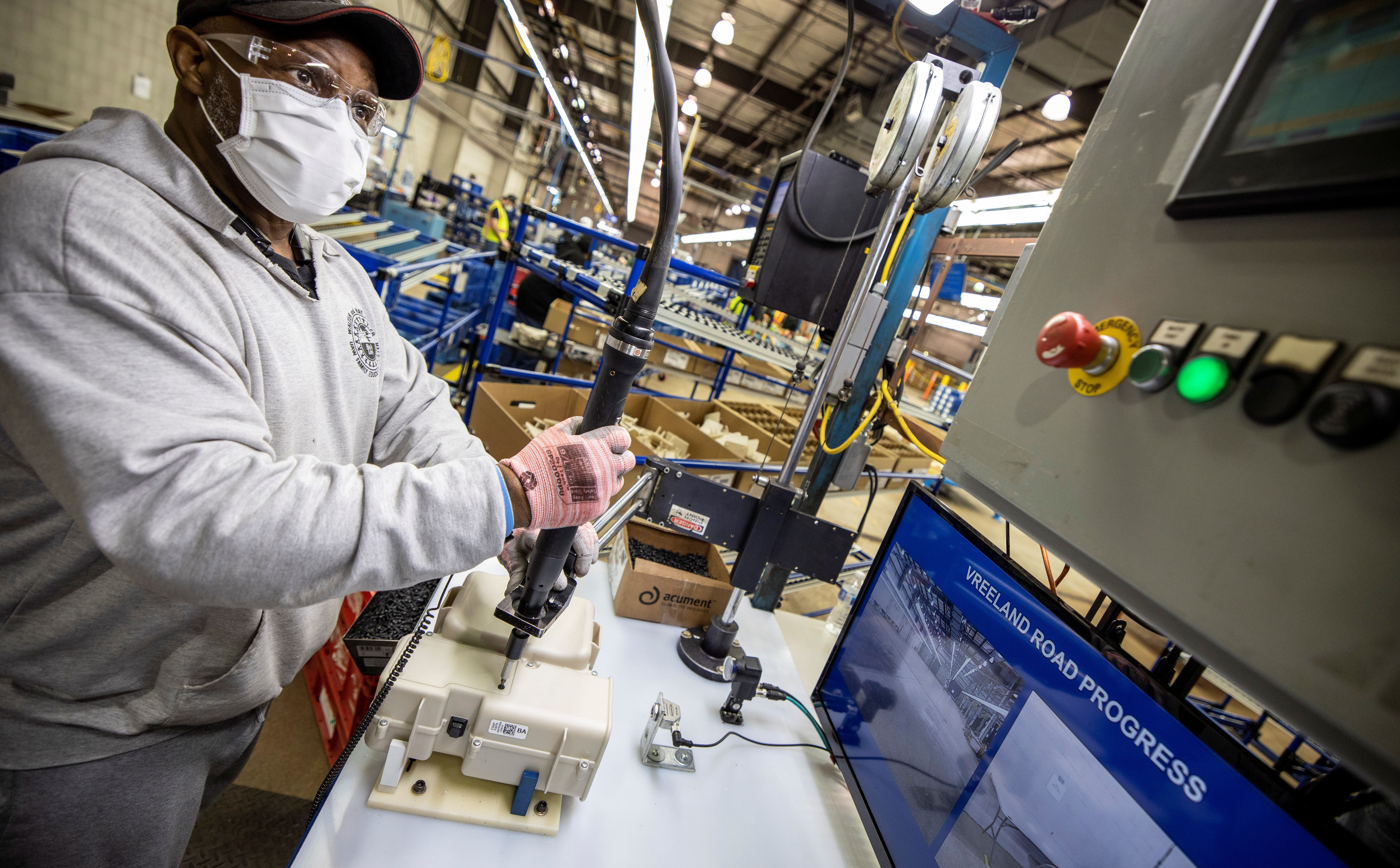 Even the auto sector won't see a full return to normal yet, and if people don't start buying vehicles again, the workers could be sent home. Yet automakers say there's enough pent-up demand, especially for pickup trucks, to get factories humming again.

That could help states slow the drain on their unemployment benefit funds. In Michigan, where over one-third of the labor force sought benefits, the fund fell from $4.6 billion before the pandemic to $4.1 billion on April 30, said Jeff Donofrio, director of the state Department of Labor and Economic Opportunity.

Some returning auto employees could work part-time and get still some unemployment benefits, but federal programs could cover part of their payments, he said.

At Ford, where about 47,000 U.S. factory workers will return by next week, there's optimism that consumer demand will accompany them. Chief Operating Officer Jim Farley said the company, using data collected from new Ford models from the past two years, is seeing sales recover.

In Europe, China and the U.S., Ford has found a correlation between the number of trips people take and auto sales, with trips increasing as restrictions eased.

“We started to see in early April a change where people started to take more trips," Farley said Thursday.

"The (sales) decline stopped and our retail sales improved a lot." Auto sales in China, where the virus peaked before the U.S., could be harbinger of things to come. China sales fell in 2.6% in April but losses narrowed from the 48% free-fall in March. 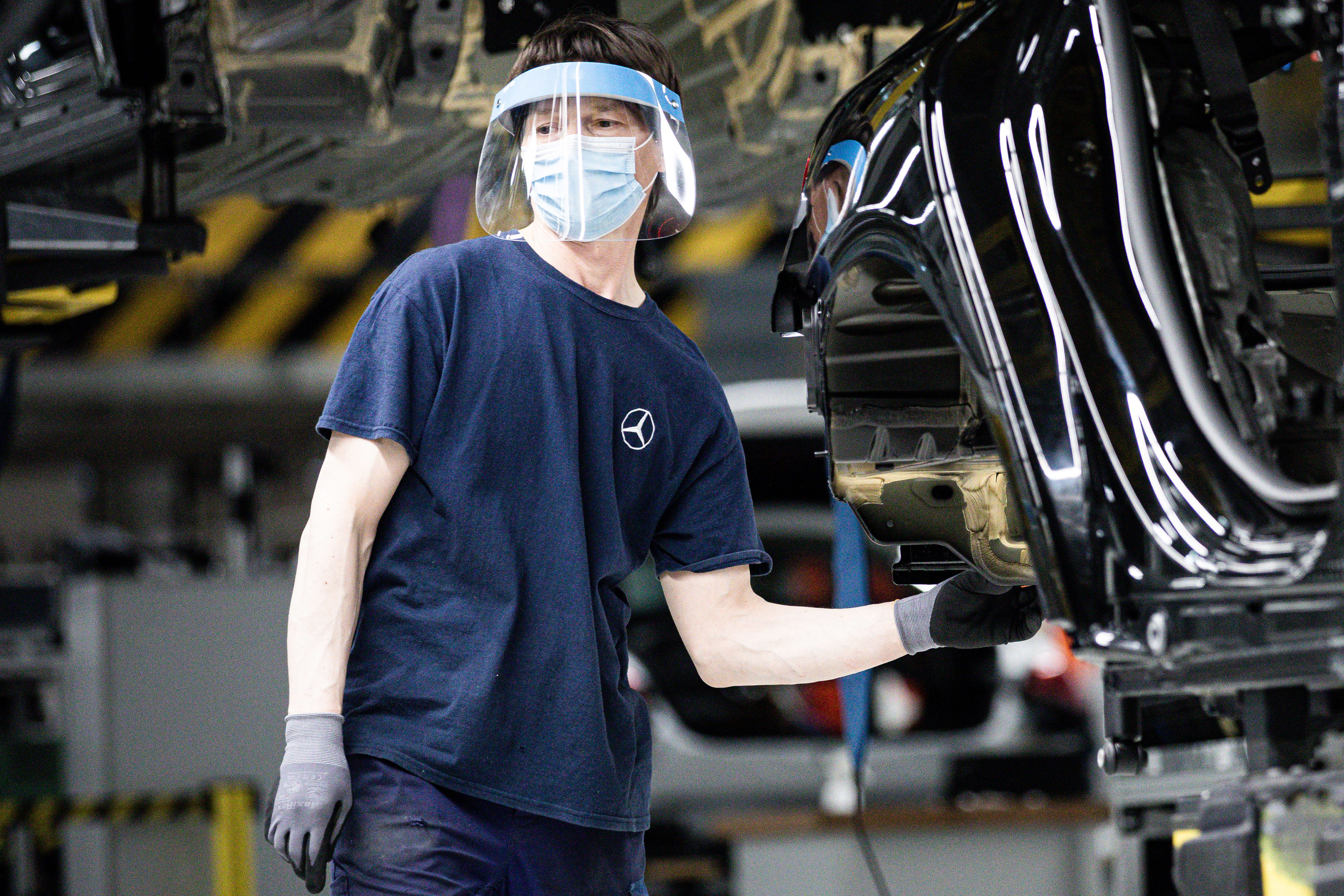 A worker wears a protective face mask and shield on the assembly line inside the Mercedes-Benz AG automobile plant, operated by Daimler AG, in Kecskemet, Hungary. (Bloomberg)

Production at many plants is nearly back to normal after being shut down in January and February. Volkswagen, Honda, Mercedes and Ford reported no virus cases among employees since reopening. Fiat Chrysler had two, but said the workers never entered factories.

Things are worse in Europe, where sales plummeted 55% in March and some factories are running only at 40% of capacity. The pandemic has affected over 1.1 million European auto industry workers, almost half the sector's manufacturing jobs.

Most are getting paid through government support. A survey of auto parts suppliers shows that a third of executives believe it will take at least two years for the industry to recover.

U.S. sales fell 46% in April as the virus took hold, but analysts are forecasting a smaller decline of 30% in May. Sales have been juiced by huge incentives, with some automakers offering 0% financing for as long as seven years.

Pickup trucks are giving automakers the most hope, said Jeff Schuster, senior vice president at LMC Automotive, a consulting firm. Through April, total auto sales were down 21%, but pickups were only off 4%, he said.

Yet Schuster says automakers could be a little too optimistic about sales overall. “Those consumers who are still unemployed are not likely to be making auto purchases," he said.

Some U.S. automakers, like General Motors, are restarting slowly, only bringing back workers on one shift in factories, some of which ran around the clock before the pandemic. Others, like Subaru in Indiana, have a full complement of employees.

Although companies are taking precautions, one big virus outbreak at an auto plant could send the industry back into hibernation. And the industry could face parts supply interruptions from Mexico, where the government wants to reopen factories despite rising virus cases. 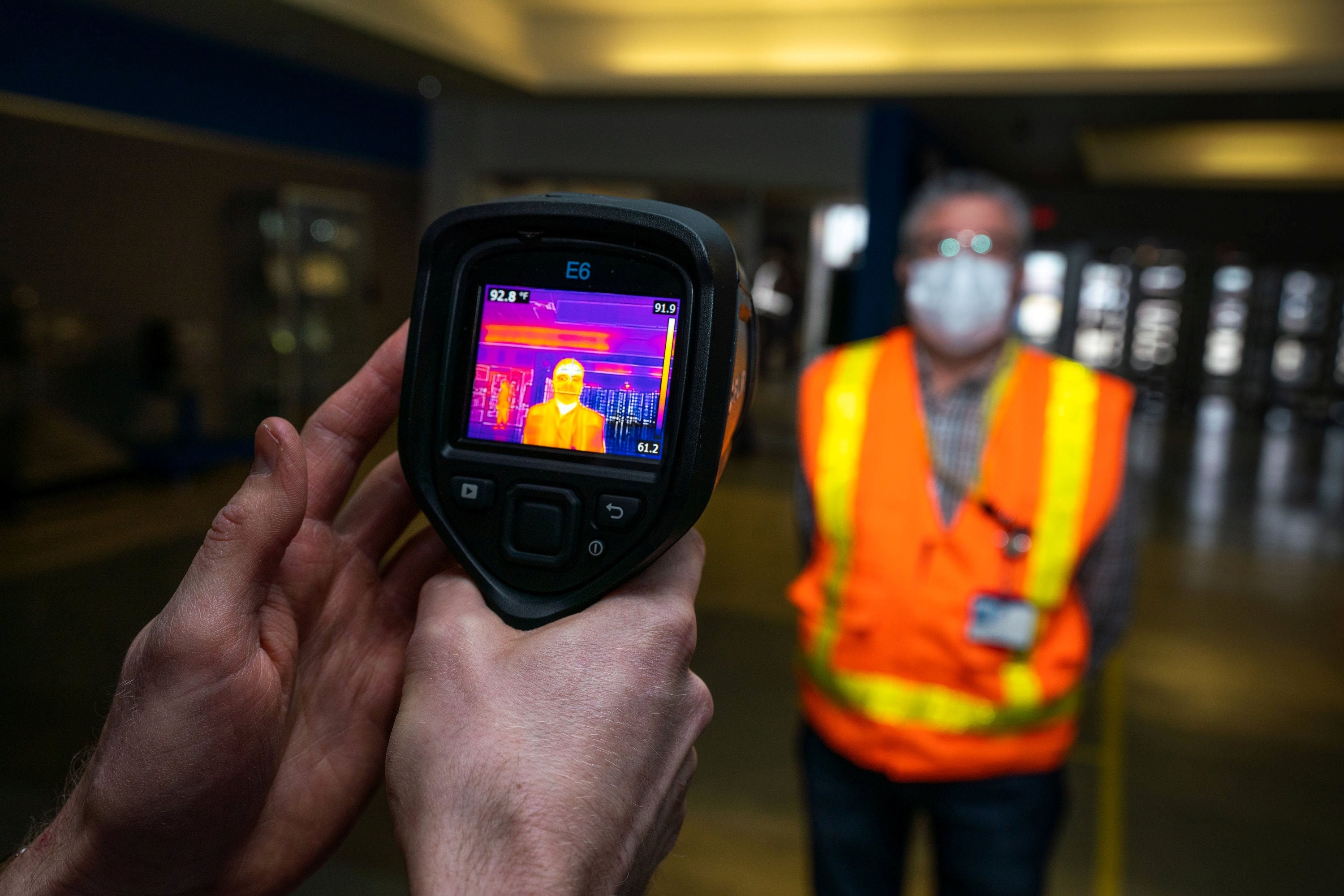 General Motors Co employees test a fever-scanning thermal camera from Flir Systems Inc at a facility in Warren, Michigan, as part of a new procedure for employees entering GM's factories as they reopen after being shut by the outbreak of the coronavirus disease. (VIA REUTERS)

Automakers in the U.S. are requiring employees to fill out questionnaires daily to see if they have symptoms, they're taking temperatures with no-touch thermometers before workers enter buildings, and they're requiring gloves, masks and face shields.

They've also tried to keep at least six feet between workers, staggered time between shifts so workers don't interact, and have put up plexiglas barriers when possible.

All the steps were tested on U.S. workers who volunteered to make protective gear and breathing machines while they were laid off. Automakers say they know of no virus cases among workers in the effort.

But Phil Cuthbertson a worker at GM's transmission plant in Toledo, Ohio, who will return Monday, said he has mixed feelings about it. “I just don't want the whole thing to be pushed on us to go back if it's not safe," he said.

Cindy Estrada, United Auto Workers vice president for Fiat Chrysler, said she's been impressed by the companies' safety commitment. But she's sure some workers, especially in the hard-hit Detroit area, will be fearful because family members or co-workers have had Covid-19.

At least 25 UAW members employed by Detroit automakers have died from the virus, although no one is sure if they caught it at a factory.

The union will be watching in case workers get infected, though there's no magic number for when it will try to close a factory, Estrada said.

“If something looks like it's becoming a hot spot, then we need to act quickly and make adjustments," she said. “No one wants to see that happen." (AP) AMS AMS